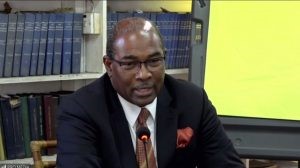 Attorney-at-Law, Nigel Hughes on Monday cited the need for scientific evidence about racial discrimination and economic disempowerment, to a meaningful National Conversation on Race and Ethnic Relations.

Speaking during day-1 of the  two-day virtual event, Mr. Hughes said was needed to back-up certain statements in areas such as wealth and income distribution based on race. He said such data would help analyse the “realistic” and add a dollar value to their contributions of various ethnicities to the making of  colonial and independent Guyana. He argued that such national data collection would help decision-makers and challenge the positions of  commentators.

“In the absence of this form, this collection of data you cannot really have any form of rational or scientific discussion about race and its impact because, otherwise, all you are doing is running opinions in the absence of national data,” he said.

Mr. Hughes said a lot of time was being spent hurling claims  at each other but little research has been conducted into issues such as income  equality. Alluding to a 2018 study by Colin Constantine, he noted that the Economic Recovery Programme (ERC) in the late 1980s had significantly eroded the income of mainly Afro-Guyanese by an Afro-Guyanese-led government.  The Attorney-at-Law said one of the logical questions is what is the race background of the 10 percent of Guyanese owns 41 percent of household  income.

He reasoned that both major parties in government have not collected data based on race because they each portray themselves as national parties, while at the same time they fight to preserve their ethnic enclaves. “The collection of data by race does not make you racist because I know a lot of people are going to say that if the government starts to collect and analyse economic information etc. by race then it means that you are subscribing to a racial agenda. Quite he contrary!,” he said.

Mr. Hughes backed Indian Rights activist, Ravi Dev’s recommendation that there should be economic impact statements, saying that such data would inform about areas in which one race benefits unfairly or to disadvantage of others so that remedial action could be taken.

Touching on the issue of democracy, Mr. Hughes said that democratic elections would not result in equality of treatment. He said the Constitution and mechanisms need to be put in place to address issues of equal opportunity based on data.

African Rights Activist, Eric Phillips, noting that 60 percent of Guyanese are Africans, Amerindians and Mixed own less than 5% of Gross Domestic Product,  recommended that affirmative action be taken. Responding to concerns by Mr. Phillips that only one race is getting access to wealth such as forestry, gold, oil blocks and shorebases, Mr. Hughes says privilege can only be addressed by fact-based data. “The way in which you can address the issue of privilege is by way of policy…by way of government policy and you go to the population and say that our previous economic policies enriched 10% while 50% lost more than 80 percent of their real wealth. This is not sustainable,” he said.

The Ethnic Relations Commission hopes that the two-day event, which will be held virtually, can serve in some measure, as a blueprint for possible solutions on the related challenges that confront Guyanese of all ethnicities.

The theme of the event is “Understand, Respect, Unite”.