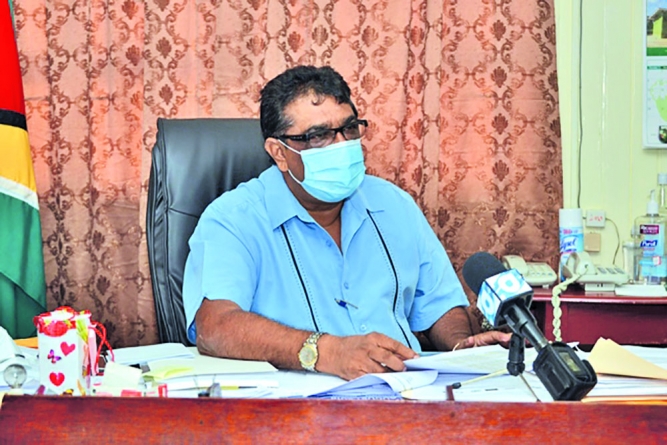 Region Six (East Berbice-Corentyne) Chairman David Armogan has assured that the National Ophthalmology Hospital at Port Mourant is expected to be able to conduct cataract surgeries before year end.

In an interview with DPI, the Regional Chairman said this service will be available upon completion of ongoing infrastructural works.
“The Cuban doctors have (assured) us that the cataract programme, in terms of cataract removal and implants, will (restart) before the year-end, once the infrastructure work is completed and guaranteed by the contractor…those would be completed by this weekend,” Armogan said.
Currently, rehabilitation works are being undertaken on the hospital’s roof and critical areas such as the operating theatre. New air conditioning units are also being installed.
“The necessary (lenses and) sutures among other equipment (needed) to be used at the hospital will arrive in the country, and so we do not want a leaky roof, which could potentially destroy the equipment,” he explained.

Armogan said this initiative by the Ministry of Health would lessen the cost to persons suffering from eye conditions.
“The hospital was really providing a great service to the poor people of our Region, and quite a lot of our people will go blind if we do not get that hospital going again, because they cannot afford to pay $75,000 to go privately,” he explained.
During a visit to the facility on October 13, Health Minister Dr Frank Anthony had said that the hospital would be boosted with equipment and more staff to expand its services.
Currently, several minor surgeries are being conducted until other equipment is acquired to expand the services at the facility.

The National Ophthalmology Hospital was commissioned in 2009 to offer specialised eye care, including surgeries for cataract and other conditions. The hospital served locals as well as persons from the Caribbean and Latin America who were seeking affordable and quality eye care surgeries.
In 2014, the hospital ceased operating after a suspected electrical fire had destroyed an operating theatre. It reopened one year later.
According to the Ministry, records indicate that during its first 10 months of operation, 21,074 persons were served at the facility.