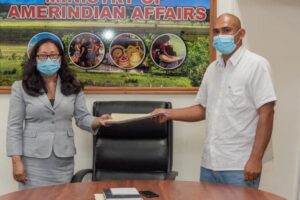 The Minister of Amerindian Affairs, Pauline Sukhai, has suspended the Toshao and council members of the Campbelltown Village Council.
The decision followed a petition for their immediate removal by residents in the area.
Residents of Campbelltown/Princeville, a community in Region Eight (Potaro-Siparuni) had submitted the petition with over 100 signatures on October 20, claiming that the Toshao, Marabel Thomas; the Deputy Toshao, Samantha John and Councillors of the Village Council were very abusive and “harsh” and they were also restricting them from mining activities.
It was stated that the issue was not recent and had been going on since April 2018.
Minister Sukhai had disclosed that in early October, she had met with residents of the area where she received reports alleging that the Toshao has been denying them their right to carry out their mining activities in the area, and “has allowed her friends and family and foreign nationals to operate without consulting them.”

Also highlighted was the lack of proper management and accountability by the council.
A letter signed by Minister Sukhai was sent to Thomas, informing her that an investigation has been launched based on the reports received and she will be suspended, with the Deputy Toshao acting until the outcome of the investigation is determined.
The Minister stated that her suspension was provided for in Section 28 (3) of the Amerindian Act which says: “The Minister may suspend a Toshao or Councillor named in the petition with effect from the date of appointment of the committee.”

In the letter, Thomas was also informed that the investigation was set to commence from November 16 with a special team led by former Chair of the National Toshaos’ Council, Yvonne Pearson.
Other members of the team were listed as Anil Roberts, Principal Regional Development Officer at the Ministry and Edward McGarrell.
A number of council members who spoke to this publication on the matter said that the Toshao had requested a copy of the said petition two days after it was issued in order to make an official response against the allegations made.
However, they said that neither the Toshao nor the Village Council have received a copy of the petition when they asked initially.

” While we the Village Council have agreed for the law to take its course following the Amerindian Act of 2006 under Section 28:4, we can certainly say that we have not been given a fair chance to respond, the petition is not a private matter… it is public, therefore the Council is the first to be given a copy. We were told by Minister Sukhai that the committee for investigation would determine when to give us a copy,” a council member said.
They have since contended that they will not allow anyone to take advantage of Campbelltown/Princeville Council. A number of councillors believe that the removal of Thomas is a political strategy used by Minister Sukhai.
They claimed that Sukhai is openly acting unprofessionally and urgently needs to be replaced by a “professional minister”.