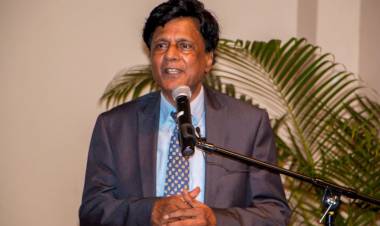 Recently, one of the biggest festival in the Hindu calendar was commemorated – Maha Shivratri. My family stayed up all night to offer the prescribed oblations to the “Shiva Lingam” (literally the “sign of Shiva”), which signifies his formless existence that pervades the entire creation. And which will eventually subside into his being until it is projected into another round of creation, sustenance and dissolution lasting billions of years.

But what occupied my mind between the four sets of oblations (“praharas”) was how little even Hindus know about the significance of their practices. But this is not mere happenstance: it is a consequence of our Britain’s colonisation of India, from where we were brought. Our “Sanataan Dharma” – or “Eternal Way of Life” – was categorised by them as a “religion”, but given a name ending with “ism”, signifying it was an ideology: “Hinduism”.

Its “Dharmic” practices were appraised from the standpoint of Christianity – the emblematic “Religion”. That Hindus had dozens of sacred texts, millions of gods, and eight incarnations of God is his sustaining aspect, made their religion self-evidently nonsensical. As conquerors of India, the British had the wherewithal to create a “regime of truth” – one that provided the instruments to determine not only whether examined statements were true or false but also whether they had any meaning at all! Performatively, these instruments or techniques as a mechanism of control can be seen as “disciplines” to give effect to the analyses in the lives of people – both the ruled and the rulers.

We are now in a position to appreciate why, for instance, the British authorities in British Guiana prohibited between 1838 and 1957, the Hindu practice of cremating their dead. Their belief that the human body had no permanent nexus with an eternal soul and could thus be hygienically and inexpensively burnt was obviously “madness” since it was self-evident that there was going to be a day when all bodies would be resurrected to be reunited with their souls. Cremation, unlike burial (never mind its ensuing decay) would evidently hinder the latter process. The law prohibiting cremation was enacted and enforced and burial was compelled: the indentureds imitated the “normal” funerary patterns of the Christianised Creoles down to the institution of the “wake”.

Even when the disciplinary regime might have been intended to facilitate the maximisation of labour on the plantations and not necessarily to eradicate ‘deviant religious” behaviour, it produced changes in the “way of life” that was Hinduism. The immigrant was given one day a week off – but this day, Sunday, was not of his choosing – it was to facilitate Christian Church attendance. Back in India, the immigrant knew of temples as places that would be visited on special occasions to make offerings to the deities. Dharmic observances might necessitate a visit to the local mandir but more likely was conducted in front of a makeshift shrine in the home.

The six-day workweek and the dawn to dusk workday– not to mention the lack of privacy in the logees -in Guyana impacted all of that. Hindus eventually started to construct Mandirs – initially shrines, such as the Shivalas they had in village India – where individual worship could be performed but very soon these were converted to larger structures for Sunday congregational worship a la Christianity. The Purohit, who would have gone to the home of the devotee to conduct the periodic ritual (pujas), because each Hindu had his/her unique conception of the Divine, now became a “priest” or “Pandit” that led congregations in Sunday “services”. The philosophy behind the practices such as Shivratri were gradually degutted.

From the standpoint of the dominant Christian “beliefs” in Guyana, the festival is not even seen as worthy of comment. Only this newspaper reported on the event that was observed all across Guyana.