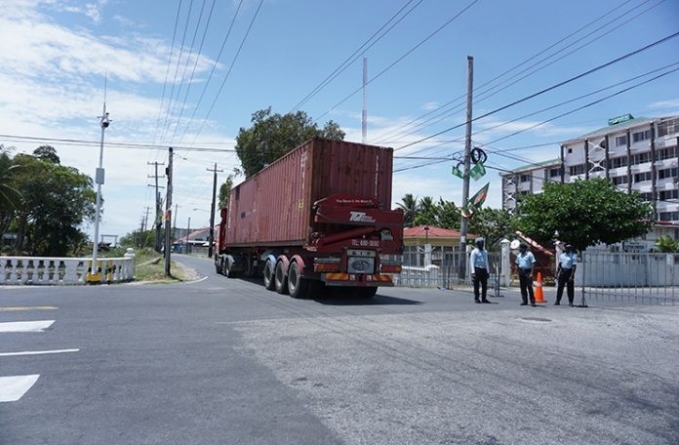 Today, the Guyana Elections Commission (GECOM) will begin a recount of all ballots cast in the General and Regional Elections from the 10 administrative regions, having crafted a Terms of Reference (ToR) document which will guide the way forward.

The ToR coincides with the law and meets the satisfaction of the country’s main political leaders. It will see the recount beginning with the contentious Region Four ballots.
The proposed location for this to take place is the Arthur Chung Conference Centre, but the venue will be finalised early today following a site visit for logistical arrangements.

The commission completed the crafting of this ToR around 21:00hrs on Sunday following deliberations with an independent high-level team from CARICOM in the country to oversee the recount.

While the team will take a hands-off approach and will simply observe the process, they assisted on Sunday by meeting with President David Granger and Leader of the Opposition Bharrat Jagdeo to communicate the position of the leaders on the ToR to the commission to help guide its work.

Both Commissioners Sase Gunraj and Vincent Alexander spoke to the media following its completion, explaining the process to come.

They said that there is the possibility that five ballot boxes will be counted at the same time and these will be supervised by the necessary GECOM staff and observed by the high-level team and other stakeholders. It is also likely that recounting will take place for over 12 hours a day.

Gunraj said that the decision to begin with Region Four was suggested by the CARICOM team as it is the “most contentious” and largest populated Region in Guyana.
He also explained that there will be no need for the use of the customary Statements of Poll (SOPs) as the commission will utilise “a document that has all the hallmarks of an SOP,” as they do not have sufficient SOPs from the concluded elections to meet the current need.

Meanwhile, the commissioners said that conference centre is being looked at as the best location as it stands to be secure, comfortable and is equipped with the necessary technology to display information on large screens.

Representatives of all contesting parties and duly accredited observers will be present along with members of the CARICOM team and all ballot boxes will be transported to the agreed-upon recounting location.

While the recount has been welcomed by both sides, questions have been raised about a possible clash with the Representation of the People Act which states that a report on the elections results must be prepared no later than 15 days after the elections.
These 15 days will be up on Tuesday, March 17, 2020.

However, Commissioner Gunraj said: “There is provision in the law for an extension of this time and we’re going to make use of that provision.”
Neither of the commissioners could give an average on how long the process could take, but committed to doing their best to putting systems in place which will ensure a smooth process.

Gunraj said: “We appreciate the anxiety that this nation is under and we don’t want to exacerbate that, but instead we want to assuage that anxiety and we believe that getting this process done in a timely and credible manner will assuage that anxiety.”

A CLEAR WAY FORWARD
Prior to agreeing on the ToR, the CARICOM high-level team successfully met with President David Granger and Leader of the Opposition Bharrat Jagdeo at the CARICOM Secretariat Headquarters on Sunday morning.

The high-level team is chaired by the former Attorney-General and Minister of Foreign Affairs of Dominica, Francine Baron.

It comprises former Minister of Finance of Grenada, Anthony Boatswain; Senior Lecturer in the Department of Government of the University of the West Indies (UWI), Cynthia Barrow-Giles; Chief Electoral Officer of Barbados, Angela Taylor and Chief Elections Officer of Trinidad and Tobago, Fern Narcis-Scope.

The meeting with the political leaders that morning marked the commencement of discussions on an agreed way forward.
Later on, at 14:00hrs, the full commission met with the CARICOM team and CARICOM Secretariat representatives, including CARICOM Secretary-General Ambassador Irwin LaRocque.

When the delegation left GECOM’s High and Cowan Streets office, the commission held another meeting to discuss matters further.

Addressing the media subsequently, Commissioner Charles Corbin said that while GECOM was aware that the President and opposition leader had agreed to a recount and that a CARICOM team would be involved, it was awaiting formal communication of the same.

The commission also understood the need for the crafting of a ToR which would ensure that all stakeholders abide by the agreements made by the political leaders and the law.
“The process will remain anchored in GECOM procedures and will be guided by the laws and Constitution of Guyana,” Corbin had assured.

He had explained that it was necessary for the ToR to be very “detailed” as the commission is keen on avoiding a situation whereby there are differing interpretations based on oral understanding on what should take place.

As such, following the afternoon meeting, Ambassador LaRocque left to meet again with the President and the opposition leader to get a precise understanding of their positions on what should be included in the ToR through an Operational Proposal.

“We don’t want to be in a position where this is an agreement which was hammered out by the political leaders and we are left to figure out what [was agreed upon]. It’s better it be settled there then we will incorporate those thoughts into what it is that we will [craft the ToR],” Commissioner Corbin said.

He too had acknowledged that there would be “legislative hoops” that the commission would need cross to proceed with the recount to ensure a smooth process.
Meanwhile, in those earlier remarks, Commissioner Gunraj stated that GECOM has “failed” the nation in providing credible elections results which can withstand scrutiny.
He said it is therefore necessary for the intervention of the CARICOM team.

BASED ON AGREEMENT
Both President Granger and the opposition leader have agreed for a recount of all regions and not just Region Four, where there was much contention.

After the March 2, General and Regional Elections, the tabulation process for Region Four became more and more complicated by the day following the illness of the region’s Returning Officer (RO); the use of a contested spreadsheet by GECOM staff; an injunction barring declaration of the results and, subsequently, a series of other objections.

After a week of legal battles which resulted in the initial declaration by the region’s RO being invalidated, the votes for District Four for the General and Regional Elections were declared again on Friday night, but the opposition for a second time alleged that the electoral process was flawed.

Chair of CARICOM and Prime Minister of Barbados, Mia Mottley then announced on Saturday that President Granger had made a request for CARICOM to field an independent high-level team to supervise the recounting of the ballots in all regions.
In the interest of transparency and accountability, GECOM Chair Justice (Ret’d) Claudette Singh has recommitted to having recounts done in light of the concerns raised.