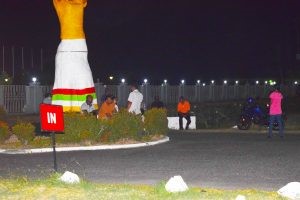 The national recount of ballots of the March 2, 2020 General and Regionals Elections was slated to have begun yesterday at the Arthur Chung Convention Centre at 12 noon.
But despite having a high level delegation from the Caribbean Community at the request of the incumbent President David Granger, that recount was delayed due to several events, with no word on when it will be started.

That high level team consists of Chairman Francine Baron, Former Attorney General and Foreign Minister; with Anthony Boatswain, the Former Finance Minister of Grenada, along with Cynthia Barrow-Giles, Senior Lecturer in the Department of Government at the University of the West Indies. The team will also be accompanied by the two Chief Elections Officers from Barbados and Trinidad and Tobago.

The Guyana Elections Commission on Sunday met with the team from CARICOM which will be overlooking the recount process and at the end of that meeting, the modalities of the recount were discussed and agreed to by all parties involved.
One such modality was that the recount will follow no number structure and would commence with Region Four; the largest district and the most problematic.

Kaieteur News understands that the team despite having agreed to the terms of the recount did not yet sign the “aid memoire”, the legal document that spells out the terms and conditions of the recount. This is according to Opposition Party Executive Anil Nandlall.

Nandlall told the media that this was one of the main hurdles that prevented the recount from starting.
According to him, the document was sent to President David Granger since last evening to be reviewed but they have since learned that he is seeking legal advice before signing off on it.
“The leader of the opposition approved it and it was sent to the President and he is apparently claiming that he needs legal advice.”

Nandlall stated that “it is a one page document that essentially captures what the CARICOM statement said.”
He explained that when asked what was stalling the recount, GECOM Chair, ret’d Justice Claudette Singh stated that she was awaiting the “aid memoire” but according to him, this would not affect the recount.
The team and Commissioners from the two major political parties, along with representatives from the smaller parties, were set to inspect the Convention Centre to ensure that it housed all the necessary equipment needed to facilitate the recount.

That was said to have taken place at 9:00am yesterday morning and lasted two hours.
The next step was to brief the relevant stakeholders and transport the containers with the ballot boxes to the location to commence the recount.

But Kaieteur News was reliably informed that hours had passed with no meeting being held. To add to that, reports surfaced that the Centre was scheduled to be fumigated at the time when the count was to begin.
Hours after, the containers started arriving at the Centre at around 2:00pm. By 5:00pm, all of the containers were inside of the Convention Compound along with party representatives. But no recount had started.

Later on, reports surfaced that the building was being fumigated for “ants”, which further delayed the process.
Subsequently after, police in riot gear entered the compound and reportedly ordered that party representatives along with accredited observes be removed from the company, citing no valid reason for such.
Shortly after, the party representatives were informed that they were only allowed one person at a time to keep an eye on the ballot boxes.

During the ruckus however, nothing was said as to when the recount would commence. Through all of this, no word came from the Coalition government as to why the document has not yet been signed.
And an anxious country awaits the recount of the elections.