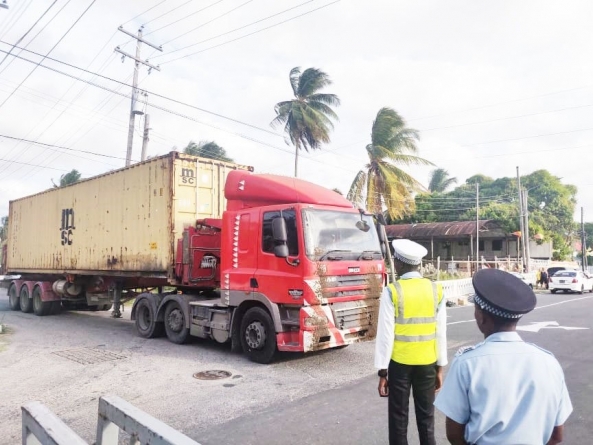 Starting with Region Four, the recounting of ballots from the hotly disputed March 2 general and regional elections should begin this afternoon under the supervision of a high-level CARICOM team.

“We have agreed in there as to what is the terms of reference and that is conclusive,” government-nominated commissioner on the Guyana Elections Commission (GECOM), Vincent Alexander, last evening told reporters, following a more than three-hour long meeting, which began at around 6pm, at GECOM headquarters in Kingston, Georgetown.

The high-level CARICOM team arrived in Guyana yesterday following an announcement on Saturday by CARICOM Chair, Prime Minister Mia Mottley of Barbados, that President David Granger had made a request for CARICOM to field such a team to supervise the recounting of the ballots in all regions. Opposition Leader Bharrat Jagdeo had agreed to this move, which followed a contentious vote count for Region Four that resulted in allegations of fraud.

The five-member CARICOM team is chaired by former Attorney General and Minister of Foreign Affairs of Dominica, Francine Baron; and comprises former Minister of Finance of Grenada Anthony Boatswain; Senior Lecturer in the Department of Government of the University of the West Indies, Cynthia Barrow-Giles; Chief Electoral Officer of Barbados, Angela Taylor; and Chief Election Officer of Trinidad and Tobago, Fern Narcis-Scope.

Yesterday’s meeting of GECOM’s six commissioners and Chairperson Claudette Singh, as well as Chief Election Officer Keith Lowenfield, saw them first working out the modalities for the count.  About one and a half hours later, when that process was completed, they were joined by the CARICOM delegation along with CARICOM Secretary General Irwin LaRoque, to “fine-tune” the process until consensus is reached.

The Arthur Chung Convention Centre at Liliendaal, East Coast Demerara, was proposed by Singh as the place of counting, and if a site inspection by the commission at 9 am today goes well, the counting of Region Four ballots will begin by this afternoon.

Alexander said that the CARICOM delegation suggested that Region Four be the first region to be recounted given that it was the largest and they wanted to begin with it as they felt they would be most mentally alert at the beginning.

“That question did arise and their argument was that it was the largest region and therefore when they are fresh, they should do [the] largest first. As a consequence of that logic, we are not going to follow [the] sequence of the regions but what we are going to do is follow from the largest to the next largest, until we get to the smallest,” he said.

Alexander explained that the process for counting has been worked out where each member of the CARICOM team will supervise the counting of a ballot box. “There is the possibility that we will be conducting simultaneously five counts; five ballot boxes at the same time,” he said.

There were some overarching legal frameworks to clear before the process could begin.

President David Granger yesterday said in an address to the nation he had spoken to Mottley earlier in the day about the functioning of the high-level team. It is unclear why this had not been worked out on Saturday when the initiative was first announced.

He said that he had proposed to Mottley that the initiative for the recount of the March 2 votes operate within the legal framework of the constitution and respect the role of GECOM and the rulings of the Supreme Court.

He said he also urged that GECOM be allowed to craft the terms of reference governing the relationship between it and the CARICOM Initiative.

Granger further said that the organizational structure for the recount should be determined by GECOM.

This is what led to the discussion at GECOM on the way forward.

PPP/C-nominated commissioner Sase Gunraj last evening explained that GECOM is looking at the legal and technical modalities to fit it into the commission’s framework, so that there is no contravention of Guyana’s Constitution.

“A stumbling block was the overarching agreement that governs the operations of this special supervisory team and an agreement between the two would be signed,” he said.

“We are a constitutional body with certain powers under the Constitution. We are attempting to fit them within our legal and constitutional framework to have them do their work,” he said.

The agreement between the two main parties paves the way for a legal extension to the 15-day statutory period for the declaration of the elections results following the close of polls. Gunraj said that GECOM cannot say how long the process of the recount will take or how long the extension will be for but they hope it is in the shortest possible time.

“We certainly will extend to cater for this process. We are trying to put, at best, systems in place to have the process done in the shortest possible time,” he said.

No statements of poll (SOP) will be used and instead a document similar to it will be created for the data to be inputted.

“We have taken a decision to use a document that has all the hallmarks of a SOP and will be the subject of the public advisory to reflect that box,” Gunraj said. He said that while the current and past tabulations per box will be compared, “the final tabulation is in that box.”

Ballot boxes will be moved under police escort to the location and party representatives will be present to assuage their fears of the boxes being compromised.

No decision has yet been taken on public declarations of the overall votes, though the declarations will be made by the returning officers of each region, as per the law. This would mean that Clairmont Mingo, the controversial Returning Officer for District Four would make the declaration for the District. Mingo has sparked the ire of political parties, Western diplomats and observer groups for not complying with transparent procedures for the Region Four count. He has made two declarations for the Region both of which have been challenged. The OAS observer mission pulled out of the country over his conduct.

The announcement of CARICOM’s intervention has been welcomed by other contesting parties, including A New and United Guyana (ANUG), the People’s Republic Party (PRP) and the United Republican Party (URP).

ANUG presidential candidate Ralph Ramkarran was in full support of the recount and said that he was glad Granger and Jagdeo came to the agreement to have a higher body oversee the proceedings. He said he hopes that with this decision being final, no interference transpires and the results will be accepted by both parties and the country.

He felt that the CARICOM leaders listened to the concerns shown, not only by the nation but by the observers and foreign envoys in relation to the legitimacy of the results.

In agreement with Ramkarran’s position was PRP’s Valerie Leung, who, speaking on behalf of the party, said she was happy that the concerns raised by the small parties were taken into consideration when the decision was made. Leung said that prior to the release of the CARICOM statement, the parties had shared their concerns with the delegation of CARICOM leaders.

Meanwhile, URP Presidential Candidate Vishnu Bandhu stated that his only concern was the lengthy period persons have waited to learn the results. He said that the wait, he was certain, added to the opinion that the results were rigged. However, he said that the recount would be in favour of the country’s concerns. He added that a redo of the election would be gladly accepted since he feels most parties, including his own, were robbed of votes during the wait for the results.

GECOM plans to update the public as the process goes along.