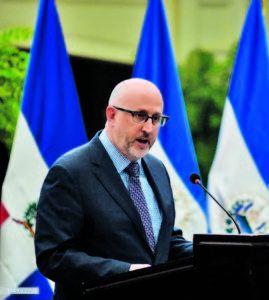 One day after Guyana’s Ambassador to the US, Riyad Insanally was warned that any Government sworn in based on flawed results would not be recognised by the Trump Administration, Michael Grant, Assistant Deputy Minister for Global Affairs of Canada has echoed similar sentiments.

Grant in a statement on Friday evening stated that the Canadian Government is closely monitoring the legal proceedings relating to Guyana’s National and Regional Elections that was held on March 2, 2020.
“We believe a recount of ballots is necessary to ensure every vote is counted. The will of the people must be respected for Canada to recognise the legitimacy of a duly elected Government.”

On Thursday Michael Kozak, a diplomat in the United States Department of State, currently serving as acting Assistant Secretary for Western Hemisphere Affairs stated that the Guyanese Ambassador was summoned to a meeting where the US reiterated its stance on the current political situation in Guyana.

“On behalf of the US Government, today (Thursday), I summoned Guyana Ambassador to the US, Riyad Insanally to convey our firm position that any Government sworn in based on flawed election results would not be legitimate. Every vote must be counted,” Kozak tweeted.
The US has previously warned that there would be “serious consequences” for those who seek to benefit from electoral fraud in Guyana.

This warning was even relayed by the US Secretary of State, Mike Pompeo, during a press conference on March 17.
“The individuals who seek to benefit from electoral fraud and form illegitimate Governments, regimes will be subject to a variety of serious consequences from the United States,” Pompeo had stated.
The US National Security Council, the forum that decides the US’s national security and military policies, has also called for democracy to prevail in Guyana.

The United Kingdom’s Foreign Secretary, Dominic Raab had also warned of “serious consequences” for those who seek to benefit from electoral fraud in Guyana.
“Any Government sworn in on the basis of non-credible results will face strong international condemnation. If the situation continues to deteriorate, this international response will include a range of serious consequences for those concerned,” Raab had stated on March 24.

Only on Thursday, A Partnership for National Unity/Alliance For Change (APNU/AFC) campaign manager Joseph Harmon dismissed allegations of electoral fraud, saying “fraud is not a political term, it is a legal concept which requires specific averments that speak to fraud. You have to detail the particulars of fraud.”
He also stated that those who are endorsing calls for sanctions were anti-national.
But Opposition Leader Bharrat Jagdeo pointed out that sanctions could be avoided if the APNU/AFC coalition did the right thing.

“They are the ones who are anti-national. The civil society organisations, the small parties, etc, we are still trying to avoid the sanctions by asking them to do the right thing, which is to have a recount done that would allow the rightful President to be sworn in and then we can avoid all of the sanctions, personal as well as national sanctions,” Jagdeo said.