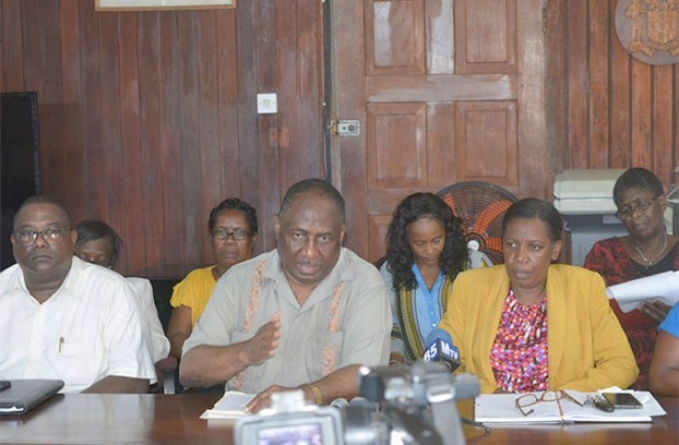 Long standing observer of elections here- the Guyana Public Service Union (GPSU) said that the March 2, 2020 polls had been severely compromised and that information generated from the Recount Process could not be adequately used to declare a winner.
The union further concluded that the March 2, 2020 General and Regional Elections should be negated, rendered null and void and that steps should be taken immediately to sanitise the list of electors and new elections called, as soon as possible.

In a statement Sunday evening the union said too that action should also be taken to rectify all the weaknesses and discrepancies identified during the recount process, including punitive action against all defaulting presiding officers. This, the GPSU said will enable the Guyanese people to have full confidence that their votes have been counted and the results are a true reflection of the legitimate democratic process.
The statement by the GPSU is seen as significant, given the large number of public servants it represents and it also comes against repeated calls from Western diplomats and the opposition parties for the recount data, which has been plagued with discrepancies to be used to declare the elections. Chairman of the Guyana Elections Commission, Justice Claudette Singh has also acquiesced to this call and had ordered the Chief Elections Officer, Keith Lowenfield to prepare a report based on the recount figure. Lowenfield has since refused, which has landed the matter before the High Court which is set to rule on it today.

In its statement, the GPSU said, as a continuously accredited Elections Observer for over two decades, it once again observed the General and Regional Elections 2020. The union said its teams were present in Administrative Regions two, three, four, and ten observing the ballot processes at over two hundred polling stations on polling day March 2, 2020. According to the GPSU from the polling day observations, balloting operations appeared smooth and transparent, even though it was very certain that below that apparently pristine surface problems existed, because of the obviously flawed lists of electors being used at polling stations. “The lists of electors were over 10 years old and because of a Court ruling and subsequent position taken by the GECOM Chairperson, could not be adequately sanitised prior to the March 2, 2020 Elections. Listed therein were over 650,000 electors over age 18 years old from a total country population approximating 750,000,” the union said in its statement.

Following Election Day operations and some dissatisfaction with preliminary results released by GECOM, an agreement was made between the leaders of the major political parties for a recount of the votes and based on this CARICOM was accredited as the major observer. To give the Recount legal status, an order was made and published in the official gazette (Order 60/2020). “Bearing in mind that collectively, the issues raised by the two major parties, questioned the validity of votes cast and the accuracy of tabulation of the votes in all ten administrative regions, the objective of the recount was to ascertain the total number of valid votes cast for each political party. Hence, the party with the most valid votes was to be declared the winner, pursuant to section 96 of the ROPA and Article 77 of the Constitution of the Cooperative Republic of Guyana.”

The GPSU said the Elections Commission by way of its Recount Order (#60/2020) specified the process and criterion for the determination of valid votes, noting that in fact Article 162 (b) of the Constitution empowers GECOM “to take such actions as appear to it necessary or expedient to ensure fairness, impartiality and compliance with the provisions of this Constitution or of any Act of Parliament on the part of persons exercising powers or performing duties connected with or relating to the matters aforesaid.” All contesting parties signed on to and publicly supported the Order.

“The Union’s observer team at the recount process observed a number of irregularities that were also witnessed by all parties present and recorded in GECOM’s observation reports as provided for by the Recount Order. These irregularities included a number of missing statutory documents necessary for the reconciliation and validation of ballots cast, which included missing documentation such as, poll books, oaths of identity, unused ballots and counterfoils, among others. This suggested to a large extent, voter impersonation and collusion between polling staff to that end.”

Additionally, the GPSU said pieces of evidence in support of the cases of voter impersonation were referred by GECOM to the Commissioner of Police, who confirmed a high percentage to be factual. “Based on the number of irregularities unearthed by the recount process witnessed by the Union’s observer team, the Union has arrived at the inescapable conclusion that the results of the March 2, 2020 General and Regional Elections could not be credible. It therefore appeared that a party or parties conspired to use information in the flawed voters list in an unlawful manner to their advantage. The existence of the irregularities made it difficult to identify a clear winner without being able to qualitatively pinpoint, and weed out all irregular votes. Hence, even though GECOM was properly able to tabulate the votes, the extent of missing documentation and the obvious inclusion of irregular votes, made it imperative that the votes had to be sanitised, prior to the end product being determined credible,” the GPSU stated. The union said too that in numerous instances it was impractical to validate votes cast, due to the absence of statutory documents required for reconciliation. It cited as an example a case where there were 47 ballot boxes from East Coast of Demerara, Region 4 that contained ballots without any of the required statutory documentation.