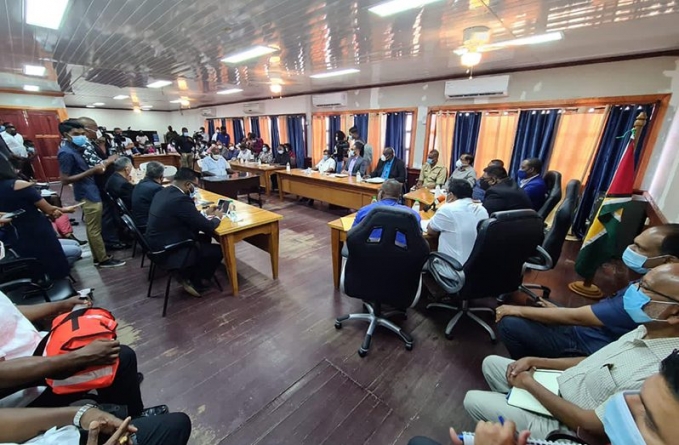 PRESIDENT, Dr Irfaan Ali, has announced the establishment of a Rapid Response Technical Team in Region Six that will work to ensure issues affecting the region are resolved in a timely manner.
Similar teams will be established in the other regions.
In Region Six, the team will be chaired by Regional Chairman and co-chaired by the Vice-Chairman of the region with the Regional Executive Officer as the Secretary.
The Head of State made the announcement during an outreach to Region Six on Friday where over 140 residents aired their concerns at the Regional Democratic Council’s boardroom, which had senior personnel from the varying agencies in attendance.
The grassroots approach to governance, a hallmark of the People’s Progressive Party administration, was aimed at bridging the gap between the people and the Government, while forging a greater connection between the agencies and the people.

The President asked for a report with respect to non-payment of six-month gratuity to former parliamentarian and Community Developmental Officer, Barbara Pilgrim.
Pilgrim, a former Mayor of New Amsterdam, told the President that when she received her letter of termination on August 11, she was on annual leave which concluded on August 28.
“At the end of August I was entitled to six-month gratuity. I have not been paid, although I made representation. Even if I was terminated, I am still entitled to payment,” she said.
Meanwhile, following a report by Julian Elliot, a former member of the Berbice Anti-Smuggling Squad, who is encountering issues at the Ministry of Natural Resources where he is currently employed, President Ali made an urgent telephone call to the ministry’s Permanent Secretary. The matter was ventilated and resolved.
Further, in another matter, the regional engineer was summoned to the meeting before being instructed to travel to the Upper Corentyne to resolve an issue of a clogged canal. The complainant said a complaint was made three weeks ago.

Representatives of Sheet Anchor/ Number Two, East Canje district, complained bitterly about the misguided operations of the Neighbourhood Democratic Chairman and his overseer. Regional Chairman David Armogan and team are expected to visit the community over the weekend.
Further, the National Insurance Scheme is expected to resolve a matter of payments of Old Age Pension to Durga Singh, who is recorded to have 769 contributions, an excess over the required amount of 750. Singh was due for pension since 2014.

Bibi Naressa Parmanand complained too that she was yet to collet her NIS Survivor’s benefit although her husband died 15 months ago. He reportedly made 1860 contributions.
The husband of a bedridden retired nurse, pleaded for insulin to help treat his diabetic wife, but before President Ali could respond, regional health officials announced that the medication arrived on Thursday and can be accessed by the patient.

Representatives from the National Insurance Scheme, the Guyana Police Force, the National Drainage and Irrigation Authority, the Guyana Power and Light Inc, the Guyana Water Inc., Lands and Survey Commission, Probation and Social Services and Office of the President, among others, were present at the meeting.