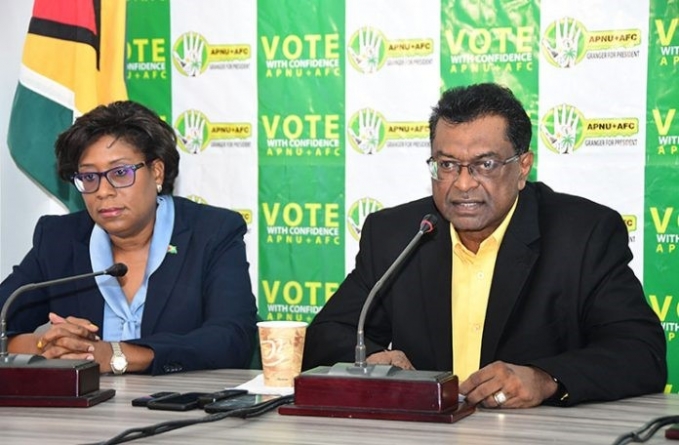 Public Security Minister Khemraj Ramjattan yesterday said the police expelled two Russians and a Libyan national from Guyana on Monday on the belief that they were here to interfere in the electoral process at the behest of the opposition PPP/C.

Ramjattan, who announced that a fourth person was being sought, also said computers, tablets, flash drives, and a number of “other things electronic” were seized from the foreign nationals and are in the possession of the Guyana Police Force.

Up to press time yesterday, the police force had not released a wanted bulletin or any identifying details for the fourth person whom they are seeking to locate.

He made the announcement at a news conference at the APNU+AFC coalition’s Lamaha Street headquarters, where he was joined by Public Telecommunications Minister Cathy Hughes, who informed the media that Ramjattan would be responding to requests for a statement regarding possible Russian interference in the elections process.

With the country awaiting verified results of the vote count in Region Four, which would determine the winner of the very close polls, Ramjattan said that the three persons had been speaking to leading members of the PPP/C at the Marriott Hotel. The minister, who admitted to being “still hazy on the position,” noted that one of the persons was Russian, another a Russian American and a Libyan. He said while the men claimed they came to work for Exxon, it was PPP lawyers and not Exxon lawyers who were seeking to represent them. He later said he understands that Exxon was contacted by the Commissioner of Police Leslie James.

“We had to deport them on elections day after our intelligence realised that there were some conspiracy to tap into to [the] GECOM [Guyana Elections Commission] computer system. They were immediately deported. A fourth one, who was not found at his Marriott room is on the run somewhere, we are not finding him,” Ramjattan said.

Ramjattan said he thought it wise to deport the three persons. “Judgement calls have to be made and when you’re a minister these are the decisions at an executive level you take,” he said, while refusing to explain the rationale.

“Yes, I thought it was a wise decision. Don’t ask me the wisdom behind it,” he added.

Asked why the men were deported and not detained, an obviously riled up Ramjattan questioned rhetorically if he should have brought it up on elections day.

Seeking to calm things, Hughes said that it would not have been appropriate, while adding that there are very clear security channels and the requisite organisations were contacted and they examined the situation and deemed the information they received credible. “Given that this was occurring on the early morning of the most important day in our history the decision that they had no grounds for these persons to be here and they were deported,” she said.

“The primary responsibility was to ensure that the right persons were alerted and the security agency dealing with the situation which they deal with,” she further said.

She asked members of the media if they could imagine the chaos that would have ensued if the information was available on Monday.

Ramjattan alleged that the persons who made calls to represent the men’s interests are well-known PPP lawyers. He also claimed that opposition leader Bharrat Jagdeo was talking to the men in Russian via phone as he noted that Jagdeo is fluent in that language. He said there was intelligence to support this claim.

Ramjattan named former NICIL head under the PPP/C government Winston Brassington as having been seen talking to another Russian yesterday morning and claimed that there was a photograph to prove this.

Brassington’s wife, Alana Brassington, subsequently said on her Facebook page that she and her husband had left Guyana since Tuesday.

Asked if the local Russian Embassy was contacted, Ramjattan responded in the negative and said he does not believe there is any connection. He also said election observers who are present here were also not notified of the development as the administration “did not want to give them other headaches.”

Anter Narine, of the American Chamber of Commerce (AMCHAM) Guyana Inc, was also singled out by Hughes as having being seen with the men. AMCHAM subsequently accused Hughes of seeking to impugn its character and integrity with her statements. “We wish to state that none of AMCHAM’s members have been deported, charged with a crime, or otherwise, and AMCHAM has no responsibility for its members’ personal interactions. In the unfortunate event it is found that there in fact were individuals or their associates working against Guyana’s sovereign interests, AMCHAM joins Mrs. Hughes in strong condemnation of any such attempts,” it said in a statement.

AMCHAM was also accredited as an election observer and assured that all of the persons accredited as observers went through a high level of scrutiny by the organisation before their names were submitted to GECOM. It added that “no Russian citizens (or any of the individuals referred to in Mrs. Hughes’ statement for that matter) were submitted by AMCHAM to the Guyana Elections Commission to be accredited,” it added.