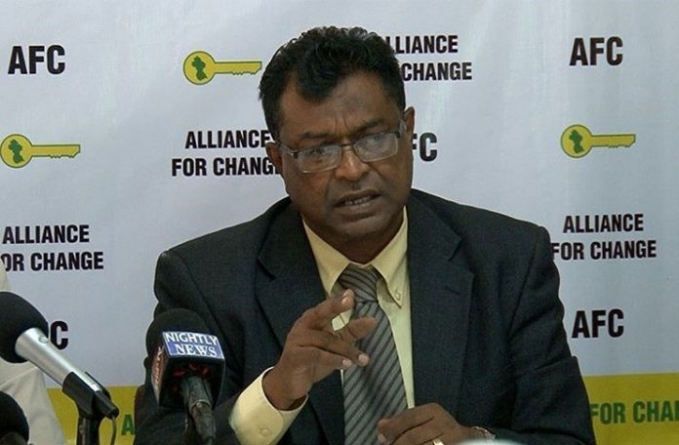 Weighing in on the elections related case currently before the High Court, Leader of the Alliance for Change (AFC) Khemraj Ramjattan said precedence was set in 2006 when AFC was advised by the Guyana Elections Commission (GECOM) to file an Election Petition after it had raised concerns over the tabulation of the votes in Region 10, which resulted in the People’s Progressive Party/Civic (PPP/C) receiving a geographic seat that should have gone to the alliance.

It was AFC Walter Melville, who had filed the Election Petition shortly after the 2006 General and Regional Elections. AFC had argued that it had won more votes than the People’s Progressive Party/Civic (PPP/C) in Region 10, and as such, it should have gotten one of the two geographic seats in that District.

In an interview with Guyana Chronicle on Sunday, Ramjattan who is also the A Partnership for National Unity + Alliance for Change (APNU+AFC) Prime Ministerial Candidate, explained that after the Returning Officer declared the votes for Region 10 (Upper Demerara-Berbice), the AFC detected an error in the tabulation which short changed it of a geographic seat.

Ramjattan, who was the Leader of the AFC at the time, along with David Patterson and Shiela Holder approached the then Chief Elections Officer, Gocool Boodhoo for a recount before the declaration of the national results but was told that the RO’s declaration was final.

“He then as CEO declared the national results, computed on that basis a seat for the PPP instead, and PM Sam Hinds sat on it. AFC then filed an elections petition which was heard some 5 years after,” Ramjattan recalled.

Today, Chief Justice Roxane George-Wiltshire will determine whether the High Court has jurisdiction to hear an electoral related case even as the elections process remains active. The case stemmed from an allegation by the People’s Progressive Party/Civic (PPP/C) the Returning Officer for Region Four Clairmont Mingo failed to complete the verification process before making a declaration on the votes in the District. A private citizen is asking the country to block the declaration of the National Results unless and until the verification process is completed in full view of the party agents and observers.

When asked about the decision in making, Ramjattan indicated that “administrative bodies, whether they be constitutional or statutory, must be consistent in their decisions, even if they are headed by different persons. You cannot have when the circumstances are square on exact, a different result for AFC in 2006 and now for another party. That is capricious and arbitrary. It was the PPP which had stoutly gone along with the elections petition route then. Their Prime Minister Candidate, S Hinds, benefitted then.”

It is likely that whether or not the declarations sought is granted, either side would move to appeal the decision. “Indeed you cannot deny that right. So if the Applicant loses he may want to go right up to the CCJ. Similarly, the CEO and GECOM can do the same. That is an unsavoury situation. What happens to the country in the meantime? It is for this reason I took the approach in 2006 when I decided to act on the presumption of regularity of the RO’s results, and proceeded with the Elections petition.” Like GECOM, he believes that the Election Petition should be filed after the declaration of the results, in accordance with the Constitution and Elections Laws if there is a concern over the result. “Its lawful conduct can only be questioned by petition, never injunctions,” the AFC Leader emphasized.

Ramjattan, who listened to the live recording of arguments put forward in the elections case before Justice George-Wiltshire, said he was impressed with the submissions from both Senior Counsel Neil Boston and Douglas Mendes, but maintained that an election petition must be filed after the declaration of the results of the elections during a 28 day period.

“You know I miss the Courts badly. But I should tell you I know both Counsel. Douglas Mendes and me were at Cave Hill Campus and Law School together in 1980s. Good friends. Use to tell me I read too much Marxism. Boston too although he was a year ahead with Carl and Basil. I thought they argued their cases very well indeed. Like true pros. They will make law here,” he said.

Like the rest of Guyana and the world at large, the AFC Leader is anxiously awaiting the Chief Justice’s ruling in the matter brought before the court by a private citizen on behalf of the PPP/C.