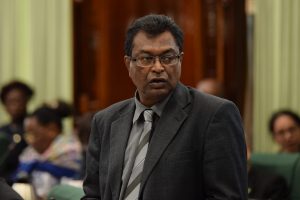 De facto Public Security Minister and the Coalition’s Prime Ministerial Candidate, Khemraj Ramjattan, has put on record that the incumbent A Partnership for National Unity + Alliance For Change (APNU+AFC) has not interfered with the operations of the Guyana Elections Commission (GECOM) for the 2020 Elections, even after three of their supporters presented court actions seeking to block a lawful declaration from being made.

Ramjattan appeared on Beyond The Surface with Stan Gouveia on Thursday evening, responding to questions surrounding the March 2, 2020 Elections.
The Public Security Minister alluded to allegations that the Coalition was complicit in interfering with GECOM, with respect to the fraudulent declarations made by District Four Returning Officer, Clairmont Mingo; the fraud laced reports presented to the Commission by Chief Elections Officer, Keith Lowenfield, and hampering the GECOM Chair, Justice (Ret’d) Claudette Singh from declaring the Opposition’s People’s Progressive Party/Civic (PPP/C) as the winners of the March 2 Elections.

To this he said, “We in government have had our hands, as far as I am aware, from all the intelligence, very far away from that constitutional body. The body is GECOM and they are the final authority on the declaration of results.”
He said, “It had court matters that intervened; it had court matters interrupted the process and many other matters right up to now,” Ramjattan continued.
Those matters were however, brought to the courts by three Coalition supporters under the guise of “private citizens.”
Ulita Moore – APNU+AFC Candidate
The first case was brought by APNU+AFC Candidate, Ulita Grace Moore, on March 17, seeking to block a CARICOM-supervised recount.

This was after news come to fore that incumbent Head of State, David Granger and the Opposition Leader Bharrat Jagdeo had agreed to a full recount of the votes cast at the March 2 polls, to be supervised by a special CARICOM scrutineering team.
Moore was an East Coast Demerara candidate for the Coalition in the 2018 Local Government Elections and she was on the Region Four list of candidates for the regional elections.
In her application, Moore through her Attorneys-at-law, government aligned Mayo Robertson and Roysdale Forde had requested that the Court order GECOM to utilize the fraudulent declarations made by Clairmont Mingo on March 13.
The High Court had ruled on the case in favour of Moore; however that ruling was overturned by the Full Court, paving way for the National Recount.
Eslyn David – Coalition Supporter

After the recount was completed, showing a clear win for the Opposition, another Coalition supporter, Eslyn David, brought a motion to the Court of Appeal in attempts to block the CEO from presenting to the Commission, his final report using the figures from the recount.
That case was brought on June 19, mere minutes before Lowenfield was expected to submit his report before the Commission at 1pm that afternoon.

David was represented by Attorneys-at-law Mayo Robertson, who represented Moore in the first case, and Roger Yearwood. She sought from the Court among other things, a declaration that GECOM failed to act in accordance with the recount order No. 60, in that it “failed to determine a final credible count and or the credibility of the result” of the March 2 polls.
David based her request on the preliminary summation report compiled by Lowenfield where he produced two alternate figures; the accurate numbers from the recount and another which took into consideration the baseless allegations made Coalition during the recount.
The Appellate Court ruled 2-1 in favour of David but that ruling was later overturned when the Opposition ventured to the apex court, the Caribbean Court of Justice (CCJ).

David, who turned respondent in the case, was represented again by Mayo Roberston.
They ruled that the Appellate Court has no jurisdiction to rule on David’s case, and cleared a path for the GECOM Chair, to once again, order the CEO to prepare his report using the recount figures.
Misenga Jones – Coalition Counting Agent

With the clear CCJ ruling, the CEO was instructed again to prepare his report. That action was marred once more, with a next court action, the most recent brought by a Coalition’s Counting Agent, Misenga Jones.
Jones, like Moore and David, was represented by Attorney-at-law, Mayo Roberston.
She had moved to the High Court with an attempt to force the GECOM to rely on nothing but the ten March 13 district declarations which were struck down by Justice Singh, as the basis on which a final Elections declaration is made.
Those declarations included the fraud laced declaration made by Mingo that Ulita Moore had wanted GECOM to use to grant the Coalition a false win.
Arguments were made in the case on Friday and the Chief Justice, Roxanne George is expected to hand down her ruling on Monday at 2pm.