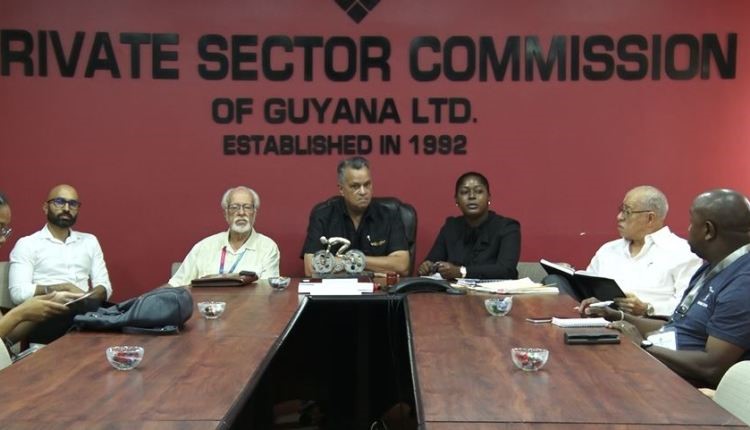 The Private Sector Commission (PSC) has stated that the events at the Guyana Elections Commission (GECOM) are “bare-faced” attempts to rig the March 2, 2020 general and regional elections.

“The private sector is terrified of having to do business in a country where fabricated elections results become final,” Gerry Gouveia, Chairman of the Private Sector Commission (PSC) said at a press conference Friday in the presence of elections observers from the Carter Center.

“We are terrified of that because businesses need to operate in a lawful society,” he added.

Kit Nascimento, one of the local observers for the PSC who was present at GECOM’s Command Centre located at High and Hadfield Streets, Georgetown on Friday morning said: “in all my life, considerable life and career in an out of politics in this country, I have never seen such a bare-faced, ugly and deliberate attempts to rig an election…not in this ugly, bare-faced, obvious manner.”

GECOM was slated to restart the tabulation of votes in Region Four on Friday morning; the media was not allowed close to the Command Centre but was rather asked to remain behind barricades set up by the Guyana Police Force at the corners of Brickdam and High Streets, Georgetown.

Mr Nascimento chronicled that one representative from each elections observer mission and party representatives who were given new badges were taken into a sealed room with little to no facilities.

There, the observers were initially restricted from using any phones or laptops but this was eventually sorted, according to the local observer.

The party representatives requested that each number on the spreadsheet which was being used by the Returning Officer, Clairmont Mingo, that did not match the parties’ copy of the Statements of Poll be verified. The request was, however, refused.

According to Nascimento, the process hurriedly began after 10:00hrs when an APNU representative stormed into the room ordering for the RO to start the process.

Nascimento explained that the RO subsequently left the room to deal with a Contempt of Court proceedings which was filed at the High Court. The RO instructed a GECOM Clerk to continue the process who began to read at “an enormous rate”, Nascimento said.

“…it became apparent that the figures she was reading out did not match any of the SOPs in the possession of the party reps or observers…There were massive variations,” he added.

According to the local observer, in every instance, votes were deducted from other parties and added to the numbers for the incumbent Coalition government while the RO refused to display the SOPs from where he copied the numbers to the spreadsheet.

The Diplomatic Community eventually walked out of the GECOM office.

Meanwhile, Gouveia believes that the international community has given up on the process after Friday’s walkout. He noted that the local and international observers who were present in the other nine administrative regions for the elections process found no issue to complain about but “the last part of these elections is in this chaos.”

He added that the business community is not mindful of who emerges winner of the elections as long as the process is transparent.

Gouveia referred to statements from the United States leaders, Canada and regional bodies on the fraudulent elections, noting that the implications are serious.

The PSC believes the Chairman of GECOM Justice (retired) Claudette Singh has the authority to settle the disputes and called for a full recount of the ballots in Region Four if the impasse continues.