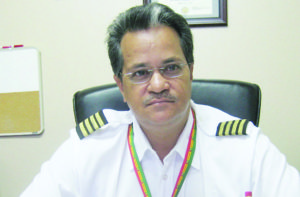 The Private Sector Commission (PSC) has called on the Commissioner of Police to ensure that the Force applies the law without favour, against attempts to incite or participate in public disorder.

The Commission made these comments in light of protests carried out by supporters of APNU+AFC on Monday, warning the Caribbean Court of Justice (CCJ) not to interfere with Guyana’s sovereignty in its ruling.
The Coalition’s campaign manager had told the Court that to assume jurisdiction in the recount case, set for a ruling today, would be a violation by the Court of its enabling treaty.

“We believe it unfortunate that any one of the political parties currently represented in the case before the CCJ should attempt to prejudice the ruling of our Apex Court in the matter before it,” the PSC stated. “We however, recognize the rights and freedom of peaceful and orderly protest but we wish to emphasize that political street protest at this particularly sensitive time by one political party can rapidly invite counter protest from their opponents with real potential for these protest to descend into disorderly and possibly violent behaviour.”
Both major parties have been making public statements seen by some sections of society as intending to prejudice the ruling of the Court.