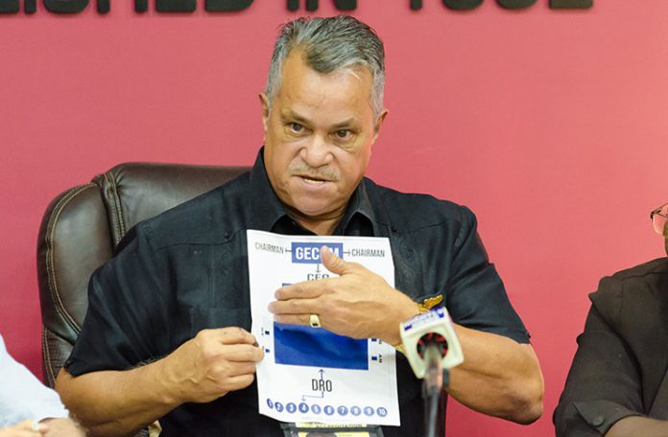 Although hailing the Election Day (E-Day) process, the Private Sector Commission (PSC) has expressed concern about the pace at which results are being released by the Guyana Elections Commission (GECOM).

Over 600,000 Guyanese were eligible to vote in the 2020 General and Regional Elections, on Monday. And, there were some 2,339 polling stations across the ten administrative regions. Nine political parties competed in the general elections and 11 in the regional elections.

Speaking particularly about the declaration of results from the regional aspect of the elections, Chairman of the PSC, Gerry Gouveia, during a press briefing on Tuesday, said the commission was disappointed that after 24 hours since the close of polls, Returning Officers (ROs) had still not declared elections results.

The PSC commended GECOM for conducting a smooth process on Monday, but said the consistency should have continued on Tuesday.

The regional results, however, started to be declared just after 18:00hrs on Tuesday. Up to press time, there were declarations by ROs from Regions One, Two, Five, Eight and Nine.
Prior to the release of results in those areas, Gouveia said he had raised the PSC’s concerns with Chief Elections Officer (CEO), Keith Lowenfield, who the PSC assumed was holding back the declarations.

“He (Lowenfield) told me that he was not interfering with the process…and that the returning officers were allowed to make their declarations,” he said.

Speaking about the suspected effects of the “late” declarations, the PSC chairman said: “The entire city is still shut down and that is not good for Guyana… the reason why the private sector is so involved in this process is particularly for our businesses to grow and for our employees…we need to do it in a stable environment where political stability and general public safety and security is paramount.

“Across the city and a lot of parts of the country, there’s an apprehension by business owners and we are actually reaching out to say to them we have confidence in the GECOM system, and hopefully will get these results very quickly.”