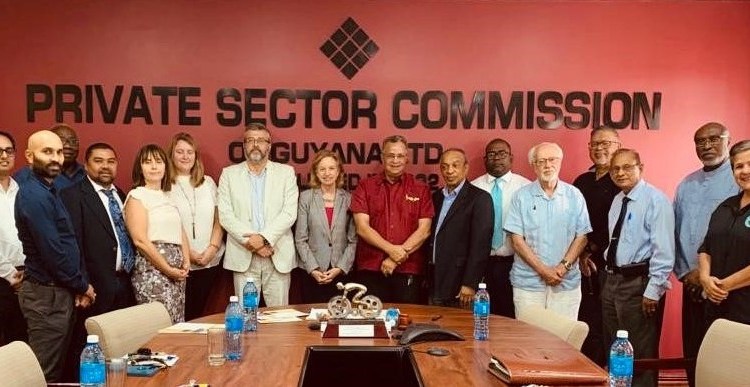 The Private Sector Commission (PSC) on Friday met with foreign missions in Guyana who will observe the electoral process.

According to the PSC, the meeting was held to discuss matters of concern to the Private Sector Commission with regard to its commitment to the holding of free, fair and peaceful elections and the role of the International Observer Missions invited by the Government of Guyana to cover the Elections.

“The International Observer Missions are to be fully imbedded in technical and advisory roles within GECOM and will be observing the elections across the country on polling day.

“The Private Sector Commission underlined the need to reinforce public confidence in the conduct and administration of the elections by the Guyana Elections Commission (GECOM) and was briefed on the programmes and activities already in place and in further progress of the Observer Missions,” the PSC stated.

The PSC said it was was informed that the Observer Missions were coordinating their work in Guyana in order to facilitate the maximum possible presence and viable coverage across the country in observing the preparations, the conduct and the conclusion of the electoral process.

According to the PSC, the Ambassadors and Diplomatic representatives endorsed its efforts in advancing the introduction of Codes of Conduct governing the political parties and media for the purpose of the elections.

“The Ambassadors and Diplomatic representatives agreed to continue meeting with the Private Sector Commission on an ongoing basis as the occasion may arise for further consultation and an exchange of information,” the PSC stated.