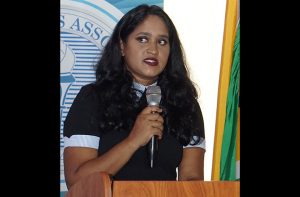 The upcoming March 2, 2020 general and regional elections are said to be the “mother of all elections.” With all eyes on the nation and the political leaders during the season, ethical behaviour is said to be paramount at all time.

But sadly, politicians sometimes forget ethics and lash out at their opponents during their various rallies during heated speeches, observers say.
The Ethnic Relations Commission (ERC) has been on high alert, putting systems in place to monitor speeches and implement sanctions on these very politicians by drafting a code of conduct to impose strict guidelines ensuring that the politicians are held accountable for their less than savory actions.

Since the drafting of the code, the ERC recently reported that only one party out the eleven approved to contest the upcoming elections had responded to the draft sent out for amendments.
Since then, a date has not been fixed for the signing of the code of conduct by the parties and with elections just a few weeks away, concerns are being raised.

As such, the Guyana Press Association has called on all the political parties to commit to the early signing of the code of conduct to ensure there is clear accountability at such a crucial time.
Head of the Association, Nazima Raghubir, speaking at a recent GECOM training, maintained that the commitment to such a code of conduct “goes beyond the ink.”

“The code, albeit non-punitive, should not only reflect political parties’ willingness to steer clear of mischievous statements but also a commitment to refrain from peddling disinformation.”
The code of conduct drafted by the ERC covers the entire elections period and monitors not only political rallies but small meetings, press briefings and posts to social media.

In terms of sanctions for infractions by Guyana’s political leaders, the ERC has indicated that if investigated and the complaints are found to be of a serious nature, the said individual can be charged criminally.
Additionally, the findings of the ERC’s investigation can be forwarded to the Chairman of the Guyana Elections Commission (GECOM) and the political party can be removed from the ballot. The Commission highlighted that the type of sanctions solely depend on the gravity of the complaint.

This author has not added a biography. Meanwhile 1953 Movement has contributed 11895 posts. Click here to view them.