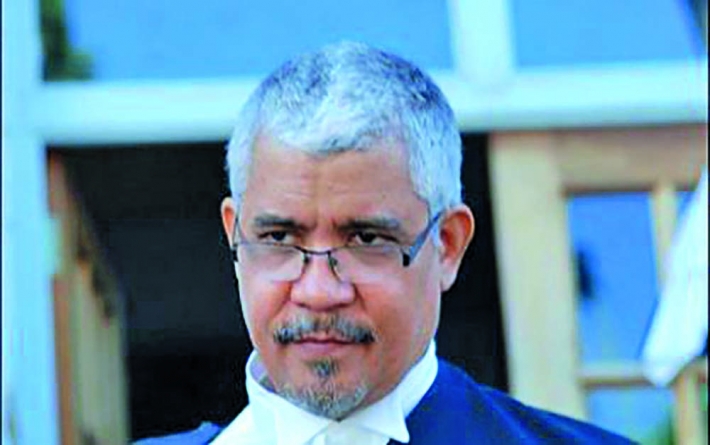 It was a battle of wits on Wednesday as the Caribbean Court of Justice began hearing arguments on the appeal filed by the Peoples Progressive Party Civic (PPP/C) in the Mohammed Ifraan Ali et al v Eslyn David et al case against a decision handed down by Guyana’s Appeal Court; and eventually, July 8 was set to hand down judgement.

The hearing kicked off with Trinidadian Senior Counsel Douglas Mendes laying out his reasons why the Court of Appeal exceeded its jurisdiction when it interpreted Article 177 (2) of the Constitution to say “more votes are cast” should mean “more ‘valid’ votes are cast”.

Mendes is among a battery of lawyers representing the applicants, PPP/C General Secretary Bharrat Jagdeo and Presidential Candidate Dr Irfaan Ali. Citing the Eslyn David submissions which the Court of Appeal had ruled on, he pointed out that they failed to reach the threshold for jurisdiction under Article 177(4) of the Constitution. He noted that while references were made to Order 60 of 2020, it cannot be applicable.

“That is how they seek to transparently connect what the real complaint was, which is the failure of GECOM to determine a final credible count with Article 177…there is nothing in 177 that tells you how to determine (more votes cast), so it’s plain you’d have to look somewhere else to figure out how to determine more votes cast,” he said, noting that the Representation of the People’s Act sets this out.

Mendes further noted that in order for David to invoke the Court of Appeal’s jurisdiction, her submissions would have had to question the qualification/validity of the president. Moreover, Mendes noted that a president must be elected before the court’s jurisdiction is invoked.
The Trinidadian lawyer pointed out that the only President at the time of the case was President David Granger, who’s election was since 2015. Moreover, the general precedent is that validity of an election of a president is determined after said president is elected.

“You have to determine an election as quickly as possible, and the general principle is you determine it as quickly as possible. The principle is you determine validity after an election is (completed), so the country can settle down and you have a government in place,” Mendes said, citing case law to bolster his arguments.
Further, Mendes also argued strongly that it is the High Court that has “exclusive jurisdiction” to address matters in relation to the validity of an election; however, this has to be done via an elections petition after the results of that election have been declared and a government is sworn in.

“That is the tenuous thread by which the Court of Appeal, having said it needed to construe the order, decides it is going to give an interpretation of Article 177(2). If this court agrees that all the issues in her affidavit pertains to a complaint that GECOM conducted a recount and then instructed Lowenfield to file a report using the recount numbers, then that conflation which led to judgements from two judges in the Court of Appeal is without contemplation.
“The only paragraph that I have been able to discern in this entire application and affidavit, which speaks to a credible vote and credibility of the March 2 election, is paragraph 27,” Jonas told the court.

Following hours of lawyers trading barbs on matters of jurisdiction, as well as the substantive appeal, the CCJ eventually set July 8 to hand down its judgment. In the interim, they will study the submissions made by the lawyers.