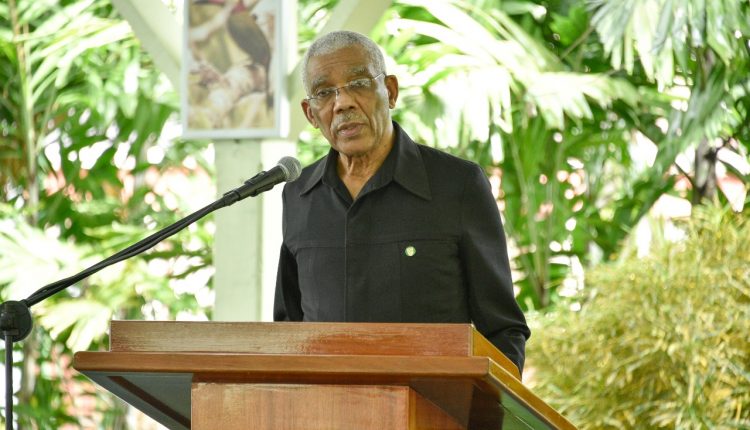 A TOP legal luminary here said on Sunday that David Granger has been deemed the reelected President of Guyana, based on the Constitution, given the results tendered by the Chief Elections Officer.

The legal expert says that Chairman of the Guyana Elections Commission Justice Claudette Singh has to follow the Constitution of Guyana, which requires her to declare Granger as President. “Anything outside of that will be considered unconstitutional,” the lawyer said, alluding to the Constitution which requires the chairman to act only on the advice of the CEO. “She has a duty to uphold the Constitution; she cannot say she does not want his report and want another one.”

Chief Elections Officer (CEO) Keith Lowenfield on Saturday submitted his Elections Report to the Guyana Elections Commission (GECOM), showing a win for the A Partnership for National Unity + Alliance For Change (APNU+AFC).
The Elections Report, the third of its kind since the conduct of the March 2, 2020 General and Regional Elections, was submitted to the Chairman of GECOM, Justice (Ret’d) Claudette Singh on Saturday at around 11:00hrs by the Chief Elections Officer. It is reflective of the declarations made in March 2020 by the Returning Officers in the country’s 10 Electoral Districts.

According to the Elections Report, there were a total of 475,118 valid votes cast at the General and Regional Elections, and of that number, the APNU+AFC secured 236,777 votes, while the PPP/C raked in 229,330. A New and United Guyana (ANUG) received 2,275 votes; Change Guyana, 2,026 votes; Liberty and Justice Party (LJP), 2,569 votes; People’s Republic Party (PRP), 862 votes; The Citizenship Initiative (TCI), 680 votes; The New Movement (TNM), 246 votes; and the United Republican Party (URP), 353 votes. There were a total of 3,997 rejected ballots.
Based on the valid votes cast in favour of the Lists of Candidates that contested the elections, the APNU+AFC was allocated 33 seats; the PPP/C, 31; and the Joined Lists – ANUG, LJP, TNM – one seat in the National Assembly. The National Assembly has 65 seats.

In submitting his Elections Report, the Chief Elections Officer told the GECOM Chair his Report was consistent with Article 177 (2) (b) of the Constitution, and the Elections Laws governing the country. “It is my understanding that Article 177 (2) (b) of the Constitution affords the technical officer the right to advise the Chairman of the elections result that ought to be declared. In this regard, I have prepared and submitted the results of the General and Regional Elections in accordance with my statutory and constitutional duties, and all applicable laws,” Lowenfield said in a signed letter to Justice Singh.

Lowenfield, on Friday, July 10, had sought clarification from the GECOM Chair, based on a request she had made, but instead of providing the required clarity, Justice Singh insisted that the Elections Report be submitted in accordance with Article 177 (2) (b), Section 96 of the Representation of the People Act; and the Certificates of Recount, which were generated during the 33-day National Recount.

A COLLISION WITH THE CONSTITUTION, ELECTION LAWS

In his Friday, July 10, 2020 letter, the Chief Elections Officer had said that the July 8, 2020 judgment of the Caribbean Court of Justice (CCJ) in the case – Irfaan Ali and Bharrat Jagdeo v Eslyn David and others ruled out the notion that the Elections Commission could determine the credibility of the Elections. On that basis, he said Order No. 60 – the legal instrument used to trigger the National Recount – could not be executed in its entirety. The primary objective of the National Recount was to determine a final credible count as provided for in Order No. 60.
Further, Lowenfield sought clarity on the request for another Elections Report under Section 96 of the Representation of the People Act.

“Kindly provide guidance on how Section 96 (1) of the ROPA could be properly operationalised,” the Chief Elections Officer asked, while noting that “of particular relevance are two facts: 1) that the election law envisages that “the votes counted, and information furnished” would be provided by statutory officers and 2) the allocation of seats is premised on the statutory report of the Returning Officers.”

On March 14, the Chief Elections Officer had submitted to the GECOM Chair an Elections Report on the basis of declarations made by the Returning Officers in the 10 Electoral Districts, in accordance with Section 96 of the Representation of the People Act, but those declarations and the Elections Report were placed in abeyance to pave way for a national recount, after allegations of electoral fraud had erupted during the tabulation of the Statements of Recount in District Four.

The Elections Commission had relied on Article 162 of the Constitution, and Section 22 of the Elections Law (Amendment) Act to bring Order No. 60 into effect, but the CCJ, in its ruling, said the allocation of seats in the National Assembly and the identification of the successful presidential candidate could only be based on the reports of the Returning Officers.

Paragraph 37 of the judgment reads: “Both the allocation of seats in the National Assembly and the identification of the successful presidential candidate are determined on the sole basis of votes counted and information furnished by Returning Officers under the Representation of the People Act.”

Against this background, the Chief Elections Officer reminded the Chair of the Elections Commission that the National Recount was not undertaken by Returning Officers. “The concluding opinion [Paragraph 52] of the CCJ’s judgment states that Order 60 is in tension with the Constitution of Guyana, and could not create a new election regime,” Lowenfield had said.