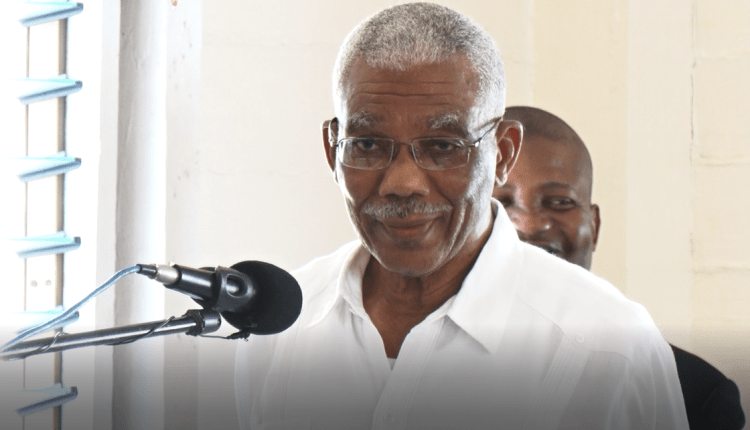 PRESIDENT David Granger has condemned acts of civil violence, which was perpetrated in Region Five (Mahaica-Berbice).

The President expressed concern about the situation, after a private property, located in Bush Lot, West Coast Berbice was torched and destroyed in what is reported to be an act of arson. According to reliable sources, the property was a butcher shop owned and operated by a known supporter of the incumbent A Partnership for National Unity and Alliance For Change (APNU+AFC) coalition.

“I was saddened to learn, today (Saturday), of the destruction of private property and of attacks on innocent citizens on March 20, 2020 in Bush Lot Village in the Mahaica-Berbice, Region Five. I condemn these hateful acts of hostility aimed at terrorizing innocent citizens and instigating discord,” President Granger said in a statement, on Saturday.

In light of these acts of violence, the President called for good sense to prevail and urged residents to desist from communal violence. He also called on the perpetrators to cease these criminal acts immediately.

As a show of his seriousness, President Granger said: “I urge the law enforcement agencies to act swiftly to ensure the safety of citizens and to bring perpetrators to justice. The Guyana Police Force must ensure that law and order prevails in the interest of the protection of citizens and the state.”
The recent acts of violence on innocent civilians and their property follow attacks on schoolchildren and on law enforcement officers on March 5, 2020, in Region Five. The President said the local media also showed images of a “hooligan,” brandishing a firearm in confrontation with policemen on March 06 at Lusignan.

There were also reports of “lawlessness” at Black Bush Polder, Tain, and East Canje in Region Six (East Berbice-Corentyne).

“I extend my sympathy to the children and police officers who have been injured and to the family which lost its property in the apparent arson at Bush Lot Village. I express my condolences to the family of the person who was shot in the fracas. I condemn the violence and criminal acts that have occurred since March 02, 2020,” President Granger said.
In this regard, he called on citizens to respect the rule of law and to be patient as they await the ruling of the Supreme Court and the completion of the electoral process by the Guyana Elections Commission (GECOM).

President Granger, in an address to the nation on Friday, had said GECOM and the Judiciary must be allowed to execute their functions without inference.

It has been 19 days since thousands of Guyanese went to the polls, but attempts by the elections commission to declare the results have been met with litigations.

Amid claims of a flawed electoral process, President Granger and Leader of the Opposition, Bharrat Jagdeo, had agreed to have the Caribbean Community (CARICOM) supervise a national recount of all the votes cast on March 02, but that too was blocked by an injunction filed in the High Court last Tuesday, March 17.

The Head of State, who has repeatedly iterated his respect for the Constitution, laws of the country, Judiciary and GECOM, said the independent institutions must be allowed to carry out their mandate.

“I have iterated, always, my commitment to respect the Constitution of the Co-operative Republic of Guyana, to protect the integrity of the chairperson and members of the elections commission and to obey the rulings of the courts. I am confident that these institutions, once allowed to function without interference, will provide a solution to the present situation,” he told the nation on Friday.

“The elections commission has the sole authority for the conduct of general and regional elections and must be allowed to function independent of political interference, instruction and influence,” President Granger said.

In the interest of transparency and accountability, the Head of State had endorsed moves by the Chairperson of the Caribbean Community (CARICOM), Mia Amor Mottley, to assist Guyana by sending a high-level delegation to oversee the recount of ballots cast at the elections, but this initiative has been temporarily blocked in the High Court.

“I am disappointed that the high-level team of five departed Guyana this week after efforts towards a ‘total national recount’ were stymied following the granting of an injunction by the Supreme Court. This matter remains before the court,” he said, while noting that the country’s democracy allows for interested parties to approach the Supreme Court of Judicature for judicial review of the electoral laws.

The Head of State has maintained that the electoral process must be credible. “Free and fair elections are essential to representative democracy,” he told the nation.