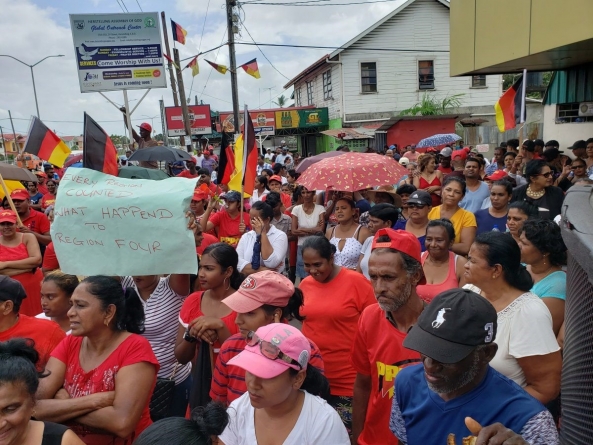 Aside from the violent protests in Berbice and the East Coast Demerara on Friday, supporters of the PPP/C also demonstrated at other locations against what they claimed was the “rigging” of last Monday’s elections.

At Canal Number Two, West Bank Demerara, residents burnt tyres, blocking off the entrance to Belle West. When this newspaper arrived on the scene, the Guyana Fire Service (GFS) had already extinguished the fire and moved burning rubble onto the side of the road. Scores of persons remained at the roadside protesting as more than a dozen police officers kept watch.

“Me nah come out here about who win or who lose but the result must come right. PPP win the election but abbe David ah try fuh rig am,” one resident said.

Police Superintendent of Region Three, R. Rose said that they received a call at 12:45 about burning tyres and they summoned the GFS. “….We responded…and persons who were blocking the road, we had to clear the road and put them on the northern side of the road. Since then they’ve been there chanting,” he said.

Shortly after, Rose and others rushed to another part of the road where tyres were yet again set ablaze. It was 2:30pm by this time. Again the GFS was summoned and they arrived, doused the blaze, cleared the road and left but they would be summoned yet again at 5:15pm to put out another fire that had been set where the first fire initially was.

Driver for Global Economy Trading, Gordon Kistoo, who does business countrywide, was among a number of drivers caught in traffic due to the road being blocked. Kistoo said that he was on business in the area and had just delivered dry goods to the shops around but after the protests, he intended to call it a day. He said he was horrified with the current situation.

“I feel the people of Guyana are being victimised by the system of this country. Each and every politician from the political parties should come out and ask their supporters to restrain and be patient…violence does not solve the problem, it only escalates the situation. I’m saddened by this…this is the first election here that I’ve seen in 30 years. I personally feel that GECOM should have revealed the results at one time. They should have long time ago developed a system where a guy could anywhere in the country put his fingerprint, show his ID, his picture comes up and he votes. With that kind of system, it’s foolproof and you cannot do anything that’s fraudulent. With 400,000 people that voted, why can’t you know who’s the winner the next day? Both political parties like this system because it works for them,” he said.

Meanwhile, Sasenarine Ramdhanny, a resident of Belle West, turned up at the scene of the second fire on the road bearing a wound under his left eye. Ramdhanny alleged that he and a group of persons were proceeding to the Demerara Harbour Bridge at about 1:30pm that day to protest peacefully when they were intercepted by police at Bagotville. While they were stationery, he claimed, persons from Bagotville began throwing glass bottles at them and one hit him on the face.

Whilst at the scene of the second fire, police were instructed over their radios to check out the Boeraserie Bridge at Parika as it was reported that a group of persons were believed to be heading there to burn tyres.

Meanwhile, at Herstelling, East Bank Demerara, protestors gathered outside the Kamboat restaurant. They were addressed by PPP/C candidate Romel Roopnarine, who called on GECOM to fulfill their mandate in an expeditious and transparent way so they can declare the results as soon as possible to quell the unrest.

“The many unnecessary delays have led to…frustrations in the country. We appeal to you to respect this process so that democracy can take its course and normalcy can be restored,” he said.

As the crowd increased, Roopnarine pleaded with persons to come off the road so they would not disrupt the flow of traffic thereby compromising the safety of others. He reminded that it was a “peaceful” protest. A number of police ranks were on site directing the traffic.

Speaking with Stabroek News, Roopnarine said that the protest was organised by residents of Herstelling and neighbouring communities after seeing the discrepancies occurring at GECOM on Thursday. “What happened yesterday [Thursday] really turned off a lot of persons,” he said.

He added that after mobilising at the location mentioned, they wanted one of their leaders to address them and he was given that responsibility as he is not only from Herstelling but a PPP/C candidate as well. “Our messages are very responsible. We have not been spreading anything such as division, hate… We have been hammering on the fact that we are truly a national party and we are [a] welcoming community. We are respectful of what you look like or where you are from. All we are concerned about is to ensure that our voices are heard and our votes are counted. It has been very peaceful and it is a remarkable effort to show the entire world that we will not allow a dictatorship to take root in our country,” he said.

He emphasised that residents will not allow the APNU+AFC coalition to “steal” the elections. “If we allow that to happen imagine what will happen in the next five years, so this is the last stand for this country and we’re standing not for PPP supporters, not for any ethnicity or grouping or whatever, we are standing for Guyanese and Guyana. We are fighting for each and every citizen out there…” he said.

Meanwhile, protestors adamantly stated that they will continue to protest until GECOM does “what is right.”

An APNU+AFC supporter, who did not wish to be named, said, “I am outraged at what is happening. We always hear about rigging but we never thought that it would ever happen so that’s why I am here. I supported the coalition but this is wrong and that is why I’m here. I want the coalition to win the right way and let GECOM do the right thing. Let them verify the process and let them announce the winner then,” she said.

Vijay Lall, 19, said that he was protesting because what happened on Thursday is “not right.”

“What the APNU trying to do is not good enough and is not fair. We trying to have a fair election and I want supporters to give them a challenge, we can’t give up like that,” he said.