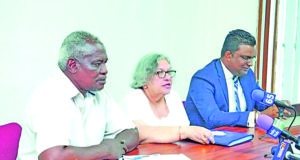 The Commissioners, in a statement, said the attacks come in light of the Chairman’s firm stance on the data that must be used to declare the results of the General and Regional Elections held last March. Justice Singh has been adamant that the data generated during the May-June National Recount must form part of the Elections Report to be compiled by the Chief Elections Officer, Keith Lowenfield.

“While Commissioners may not always agree with the Chairman, she has always discharged her duties with professionalism, fairness and impartiality, and in keeping with the tenets of the Constitution and other legal provisions,” the Commissioners said.

They added: “we unreservedly condemn these scurrilous attacks on the Chairman and call upon those engaged in such conduct, including senior members of the APNU+AFC, a contestant in these elections, to cease and desist from so doing.”

Since the March 2 General and Regional Elections a series of attacks have been launched on the Chairman of the Elections Commission with the blame being placed both at the feet of supporters of the PPP/C and the APNU – the two main contestants in the elections.
Just this week, a Linden man was placed on $500,000 after he was charged for allegedly threatened to kill Chairman of GECOM.
In May, a number of prominent Guyanese women condemned the attacks on Justice Singh after a full-page ad was published in Kaieteur News newspaper attacking the Chairman’s integrity.

The advertisement began with the headline, “What law is Claudette Singh really following?” and went on to attack the integrity of the decisions she had made pertaining to the holding of the 2020 General and Regional Elections. The ad also question whether Justice Singh is “complicit in the shenanigans at GECOM” and is “one of the ‘forces’ against a free and impartial outcome of the electoral process.”

STEMGuyana Co-Founder, Karen Abrams was among those who spoke out. “I have remained silent as the major, and minor, parties fight over what they believe is rightfully theirs, but I refuse to witness attacks on women, and allow fear of reprisal to silence me,” Abrams wrote on her Facebook page. “Have your nasty fights over power, if you must,” she said, “but desist from attacking the women of Guyana!”

Director of the Competition and Consumer Affairs Commission and former Magistrate Dawn Adriane Holder-Cush, in condemning the attacks, said Justice Singh is “a strong, brilliant woman with class and dignity.”