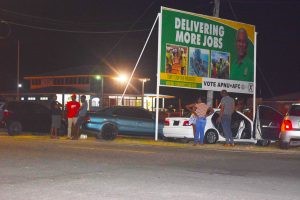 Following a series of purported obstructions to preparations for the national recount, supporters of both the major parties decided to guard the ballot boxes at the Arthur Chung Conference Centre overnight.

The ballot boxes started arriving from Guyana Elections Commission (GECOM)’s Kingston office in the afternoon and were landed at the back of the compound. Security was already well in place, even before the impassioned party supporters showed up. Kaieteur News was informed by several party representatives on the inside that, in addition to the police presence, the parties sent their own representatives to watch over the boxes overnight. Each shipping container which holds the ballot boxes is fastened shut with locks and chains. Each party is in possession of its own lock and seal for the container.

On the side of the governing coalition, supporters of A Partnership for National Unity + Alliance For Change (APNU+AFC) chose the bus shed near the Giftland Mall road as their waiting place. Few had been camped outside early yesterday afternoon, but the group started to multiply as darkness set in. Decked in party paraphernalia, they were observed huddled together every now and then.

On the side of the People’s Progressive Party Civic (PPP/C), the General Secretary, Bharrat Jagdeo, had held a 7pm press conference where he expressed frustration at how events of the day frustrated the start of the recount process. He announced that a vigil would be held at the centre to watch over the ballot boxes. Shortly after, the party’s supporters and members started to show up, and planted themselves at the front gate of the convention center, as well as the side gate accessible from the Giftland Mall road.