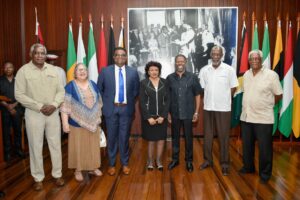 The Representation of the People’s Act has clear provisions that mandate political parties to submit a detailed report outlining expenses undertaken during the elections period.
Nonetheless, the People’s Progressive Party Civic (PPP/C) and the A Partnership For National Unity + Alliance For Change (APNU+AFC) Coalition teamed up to blatantly violate the Constitution, by failing to submit their reports to the Guyana Elections Commission (GECOM) for the March 2, 2020 elections.
Same was revealed by Chartered Accountant and Transparency Advocate, Christopher Ram.

Ram had written to the GECOM Chair, Justice (Ret’d) Claudette Singh, back in September, pointing to Section 108 of the Representation of the People’s Act dealing with Election Expenses Report.
That section requires the election agent of each group of candidates to submit that report within 35 days of the declaration of the results of the elections.

But shockingly, in her response, Ram stated that the Chair noted the six-member Commission had advised her that “although cognizant of the law, those sections were never operationalized.”
Her response, according to the Chartered Accountant would generally be considered less than acceptable under any other circumstances, “…but for a retired Justice of the Court of Appeal to admit a conscious and deliberate violation of a key element of an election law by the constitutional body responsible for the lawful conduct of elections is beyond shock.”

Not only that, Ram added that even more troubling was the fact that the violation was being condoned by the Commissioners, the Chair, “or successive chairpersons of the Commission.”
“Individually and collectively they are guilty of gross dereliction of their duty and the undermining of the rule of law and democracy in the country,” Ram stated, adding “It may not have started under Justice Claudette Singh but she is now admitting culpability by endorsing the violation.”
The Charted Accountant noted that the Elections Expenses Report is the flip side of Campaign Financing Regulations.

With the Coalition’s defiance of the December 2018 no-confidence motion and subsequently holding Guyana’s democracy at ransom with the March elections, Ram noted that it is “perfectly legitimate” for the electors to question their leadership’s fitness for any public office in this country.
Unfortunately, he added, the PPP/C’s leadership is not innocent, as it violated Section 108, “making a mockery of accountability, opening the door to corruption and undermining the country’s democracy.”
Further, Ram noted, too, that for the 2020 elections, “political parties took money from any quarters, and no one – not even their members and supporters – dare ask of them any questions.” But GECOM has the power and the duty to demand answers and compliance with the law.
It was only after reports surfaced, did the country get a glimpse of the massive sums spent during the 2020 elections.
The PPP/C reportedly expended in excess of $63.4 million while the Coalition spent at least $10.5 million on lobbyists.
No other details were disclosed.

Ram said that the refusal of the two major political parties to comply with a simple law tells ordinary citizens that despite the apparent hostility between them, “the parties will not hesitate to conspire to undermine democracy, subvert the Constitution and set aside the rule of law when it is in their joint interest.”
“They did it with crossing-the-floor legislation, the dual citizenship issue, resisting individuals being candidates in elections, and the law on election expenses – all done in the glare of publicity,” he added.

While there is excitement surrounding the calls for constitutional and electoral reform, Ram noted, too, that such calls would be far more convincing if the callers would also demand that politicians and political parties do the most basic thing in any country – demand that those entrusted to enforce the laws do their work and that there is compliance with the laws by political parties.
“We can no longer tolerate such lawlessness,” he said, continuing: “Elections are a necessary ingredient of democracy but unless political parties are held accountable and subject to law as everyone else is, democracy will be no more than an aspiration.”