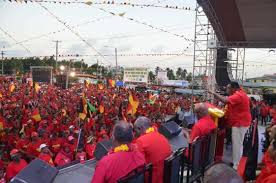 The People’s Progressive Party (PPP) has pitched the establishment of a rice stabilisation fund to assist farmers if it is re-elected to office on March 02.

“…we will examine the viability of a rice stabilization fund that can be there to help the farmers in hard time,” said PPP Presidential Candidate Irfaan Ali. He was speaking at the PPP’s Anna Regina on Saturday.

The economy of the Essequibo Coast is dependent on the rice industry. It is in this sector that the PPP holds support in the Pomeroon-Supenaam Region.

At the last elections, several Region Two residents turned their support to the APNU+AFC Coalition which promised a better price for their paddy. The Coalition was unable to deliver its promised $9,000 per bag of paddy to the rice farmers and this year, they are eager for a better deal.

Ali told hundreds of persons gathered at Anna Regina that the PPP has other plans for the industry other than a stabilization fund.

“We’re going to remove the charges on drainage and irrigation, we’re going to give back the incentives to rice farmers so that you can reduce your input cost and increase your profitability and when you suffer because of paddy bugs, we will give you help.”

Many Essequibians are eager for a better deal for their paddy.

“[We] are rice farmers and any Government go in power and do good for rice farmers, we can support them,” one rice farmer told the News Room.

The Party’s Presidential Candidate also spoke of plans for another major industry on the Essequibo Coast – coconut.

He said the coconut industry can create thousands of jobs with the production of coconut oil, coconut water and other by-products.

“We will support the Pomeroon and other areas in Region Two to build the coconut industry that is sustainable, that is strong and that is vibrant and that will help in expanding the economic base of our country,” Ali said.

The PPP pulled just over 16,000 votes in the Region at the last elections, but it was not enough to keep its two seats; instead, it managed just one, with the other going to the Coalition.

In total, it was by one seat that the PPP was removed from office; March 02 will determine if the PPP has managed to convince Essequibo that it deserves the seat of Government once more.