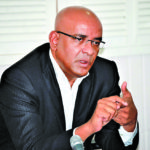 With protests against the announced unverified election results for Region Four erupting into violence in some cases, the opposition People’s Progressive Party/Civic (PPP/C) yesterday urged its supporters against breaking the law, while saying that it was working to thwart attempts to undermine the vote count.

“I want to urge the supporters of the People’s Progressive Party to remain calm, stay at home, do not break the law,” Opposition Leader Bharrat Jagdeo said in a video message that was posted to his party’s Facebook page yesterday afternoon.

Jagdeo did not address any of the protests in regions Two, Three, Four, Five and Six yesterday or the violence that occurred in some instances.

However, he said he understood the frustration and anger in a number of communities and their fear that the incumbent APNU+AFC coalition was trying to steal the polls.

The PPP, he stated, was working to ensure that this would not happen and he noted that it had the solidarity of the international community, including the diplomats from the United States, United Kingdom, Canada and the European Union mission, who have questioned the credibility of the declaration for the Region Four polls and called directly on President David Granger not to transition a new government without a proper declaration of results.

Similar statements from the United States State Department and both Democratic and Republican Congressmen and the Elders, a Nelson Mandela-founded organisation of independent global leaders working together for peace, justice and human rights, were noted.

The party yesterday also supported calls by the international community for a return to the process of verifying the results for Region Four using the Statements of Polls, as required by law. It said this is the only process that will deliver free and fair elections and ensure that the will of the Guyanese people is not subverted. Against this background, Jagdeo said if President Granger attempts to get people to act illegally to swear him in, he would be met with the wrath of international community.

He also directed a warning to constitutional office holders, including members of the judiciary and the Guyana Elections Commission (GECOM), saying that if they are complicit in aiding Granger in transitioning to a new government, then they would be party to electoral fraud.

“But do not break the law. Stay at home. Remain calm but vigilant,” he urged, while saying that the party would issue instructions on the way forward.

Jagdeo also decried APNU+AFC claiming victory without any verified results, although his party has also done the same.

In a message issued earlier, PPP/C presidential candidate Irfaan Ali also urged the party’s supporters to “remain peaceful,” while explaining that the party’s leadership had been following all the electoral processes and laws. “Remember, we are not giving up what we have won. The People’s Progressive Party/Civic has won these elections overwhelmingly, with your vote, your help and with your work and there is no way we are going to give up this or let you down,” he added.

Both APNU+AFC and the PPP/C had committed not to make premature declaration of the polling results but neither adhered to this promise ahead of GECOM’s release of the unverified results for Region Four on Thursday afternoon, pointing to a possible coalition win.