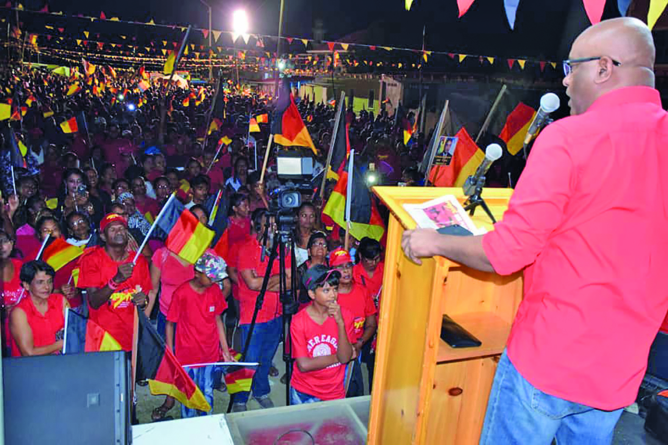 It was a scene of red, yellow and black at Damon Square, Anna Regina, Essequibo Coast, Region Two (Pomeroon-Supenaam), where thousands of PeopleŌĆÖs Progressive Party/ Civic (PPP/C) supporters decked in the partyŌĆÖs colours gathered to hear from the leadership of the party.

At the event, a number of projects and developmental initiatives planned for Guyana under the next PPP/C Government were announced. Among the plans highlighted by the partyŌĆÖs Presidential Candidate, Dr Irfaan Ali, was that a PPP Government will examine setting up a rice stabilisation fund. He made it clear to the crowd that unlike the coalition government, rice is not ŌĆ£private businessŌĆØ but rather, the business of the entire country. 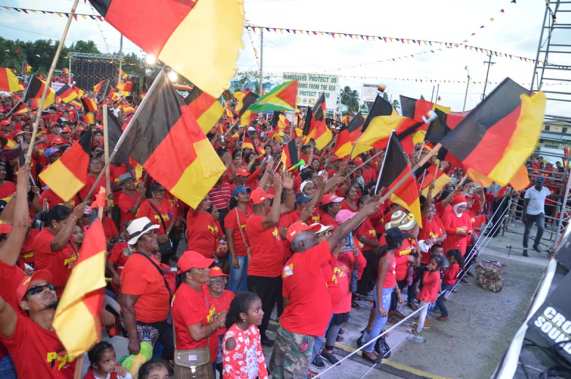 ŌĆ£Removing the taxes on equipment and machinery. Because if your cost goes down, your profits will increase. So thereŌĆÖs a plan that links the profitability of rice with policies and programmes that enhance the rice sector and industry,ŌĆØ Ali told the excited crowd.

ŌĆ£If you read our manifesto, you will see we will expand technical support and services. But very important too, we will examine the viability of a rice stabilisation fund that can be there to help the farmers in hard times. This is the commitment of your party and you know when we make a commitment, we stick with that commitment,ŌĆØ Ali added as the crowd cheered.

The establishment of a rice stabilisation fund, which would ensure that farmers are protected from price swings on a volatile global market, was one of the failed promises that the current administration had announced. It is one of the several promises that the PPP has highlighted which remain unfulfilled.

Another commitment Ali made was for specific interventions to assist farmers with their rice production. According to him, rice farmers must have incentives in order to be able to compete and enhance production.

He added that a PPP/C Government will not only work on creating new markets but ŌĆ£we have to create markets that are sustainable. Markets that are viable and ensure our farmers receive a fair price. And a fair price must be a price that is profitable to the farmer. We must support our farmers having access to low-cost financingŌĆØ.

Ali pointed out that when the PPP/C entered Government in 1992, it met a country overburdened by huge debts and a stagnated economy. According to him, his party, while in Government, rebuilt Guyana sector by sector without oil moneyŌĆ” the implication being that such efforts will be redoubled with revenues from oil and gas.

Meanwhile, AliŌĆÖs running mate and Prime Ministerial candidate, retired Brigadier Mark Phillips, also spoke about the help his party will be offering to rice farmers should they be elected at the March 2 elections.

ŌĆ£This is an agriculture region. Rice is the big crop here. And you have a government who say they donŌĆÖt have no business in rice. But we will always have a business in rice. I came here with your past Minister of Agriculture. And he told me that at the end of the last PPP/C Government, we were producing over 600,000 tonnes of rice.ŌĆØ

Phillips also spoke about security concerns in the region and how his party, once in government, will seek to properly equip the Guyana Police Force (GPF). According to Phillips, it is not just about criticising the Police Force but also about retooling the Force and equipping it with what it needs to fight crime.