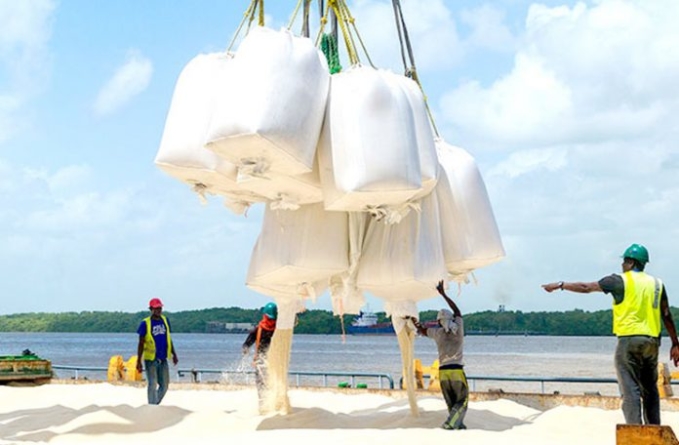 The People’s Progressive Party/Civic (PPP/C) has promised to improve the rice sector in Guyana, particularly in the largest rice-growing region, Pomeroon-Supenaam, by providing better prices and incentives to farmers.

This promise was made by the party’s Presidential Candidate, Irfaan Ali, at a rally, held on Saturday at Anna Regina Car Park, Damon Square. Last year, Guyana recorded the second highest local rice production ever, with over one million tonnes of paddy being produced in 2019. The Ministry of Agriculture reported earlier this month that some 1,049,874 metric tonnes of paddy was produced in 2019, 8,254 tonnes short of the record 2015 production of 1,058,128 tonnes. The recorded productivity of the rice industry is contrary to what was said by sections of the media and prominent persons about the rice sector declining. “2019 stands as the second highest rice-producing year to date,” said the ministry, adding that Guyana managed to produce a record amount of rice despite the plethora of challenges the industry faced throughout the year.

RECORD RICE CROP
Ali, while addressing the rally, did not recognise the record-breaking year for production, but proceeded to promise those gathered that VAT will be removed from all agriculture equipment and machinery which will enable farmers to step closer to profitability. He assured the Pomeroon-Supenaam Region residents that should the PPP/C party win the elections on March 2, 2020, the Government of Guyana will take full responsibility of the rice industry. He said incentives such as fertilisers and seed paddy will be provided to farmers whenever the industry is facing challenges. With that in mind, he said the PPP/C has plans to establish a Rice Stabilisation Fund which will afford rice farmers easy access to soft loans.

Not only was production in 2019 close to surpassing the 2015 national record, but production has increased 28 per cent since 2016. This was possible not only by the efforts extended by the GRDB, but also by the “hard work” of farmers. Region Five (Mahaica-Berbice) remained the highest producing region, harvesting 454,476 metric tonnes of paddy; this is equivalent to some 295,4009 metric tonnes of rice. The region recorded a 99 per cent harvesting rate.

The second top producing region was Region Six (East Berbice-Corentyne), which produced a total of 311,915 metric tonnes of paddy or 202,745 metric tonnes of rice equivalent. This production was the highest on record for Region Six, said the GRDB. According to the board, the region also produced some 4,910,444 bags of paddy, which was equated to a 25 per cent increase in paddy production for East Berbice-Corentyne.
Nationally, some 16,526,024 bags of paddy or 682,418 metric tonnes of rice was produced. 178,628 hectares were sown, thereby equating to 93 bags of rice per hectare or 38 bags of rice per acre.

INDUSTRY RESILIENT
General Manager of the GRDB, Nizam Hassan, said the rice industry has once again been resilient against the existing challenges and has done exceedingly well. “This time we faced those challenges head strong and head on and with determination to be even more successful than previous years,” said Hassan in an invited comment on Saturday. The general manager said the board is very pleased with the performance of the sector and owes it to the work of stakeholders such as farmers, staff of GRDB, millers and exporters. In May last year, the Guyana Chronicle reported that the performance of the rice industry continued to improve rapidly, with earnings for the first quarter of the year reaching US$41.7M; this was about 2.15 times the US$19.3M which was earned in the corresponding period in 2018.

$1.8B POWER PLANT COMMISSIONED
Another promise he made to the residents is to end power outages. He said the PPP/C has plans to pursue the Hydro Project in an effort to obtain an additional 4000 megawatts. Ali said that his team that will be running for the upcoming elections consist of young people who are ready to take charge and lead. Back in April last year, the coalition government commissioned a $1.8B power station at Anna Regina, Essequibo Coast, Region Two. Minister of Business, Hemraj Rajkumar, at the commissioning, said the new plant will benefit the business community significantly. The commissioning of the 5.4 megawatt state-of-the-art plant was witnessed by Public Infrastructure Minister, David Patterson, and Prime Minister Moses Nagamootoo, who said government has constructed several state-of-the-art power stations countrywide to improve power supply and with the new station, residents can expect a reliable power supply. Minister Patterson said the plant is equipped with three generating sets that will meet the power demand of the entire Essequibo Coast.

The plant begun operations since last December but was commissioned months after, because according to Minister Patterson, he wanted to ensure the facility was fully functional. “We didn’t want rush to open the plant and then everything wasn’t completed; we had to ensure we are handing over a functional generating set,” the minister said. He also noted that there are works to be done on the transmissions but assured Essequibians that there will be no more power outages.

Meanwhile, speaking on the development of Information Technology and Communication (ITC) sector, the PPP/C Presidential candidate said with the improvement of Internet speed, more young people would be able to pursue Distance Education Courses through the University of Guyana.

Meanwhile, promising the audience improved security was the PPP’s Prime Ministerial Candidate, retired Brigadier, Mark Phillips. He said the party’s manifesto focusses on plans for the next five years and told the gathering that the party’s candidate list has 54 per cent of young people. General Secretary of the People’s Progressive Party Civic (PPP/C), Dr. Bharrat Jagdeo, told the gathering that the March 2 Election is very crucial and it is important for persons to come out and vote. He said that the PPP/C is not trying to win the elections but it is trying to provide a better life for all Guyanese regardless of their religion or ethnic background.

He, therefore, called on all Guyanese to remember their democratic role as citizens and encouraged them to vote. Jagdeo said that the PPP/C will continue to take the legacy of its founder Leader, Cheddi Jagan, towards the path of development. Dr. Frank Anthony, who is one of the PPP/C’s candidates, told the audience that the PPP/C will provide better health services to the Guyanese nation. He told the audience that the PPP/C has plans to continue with its flagship project in building a Specialty Hospital in Guyana.