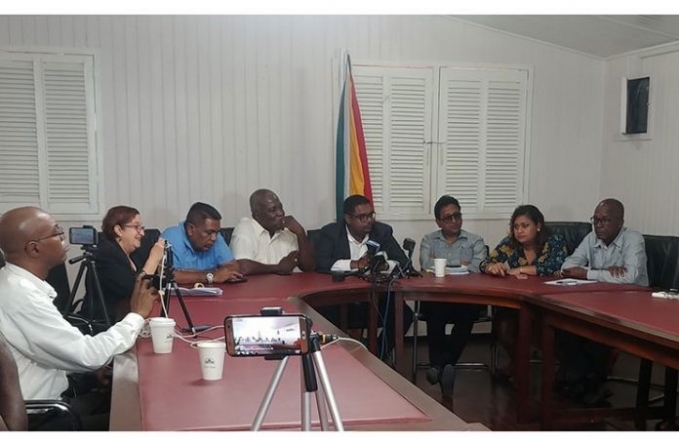 PRESIDENTIAL Candidate of the PPP/C, Irfaan Ali, on Thursday, disclosed results from last week’s general and regional elections that are at variance with those released by GECOM, but he is standing by those figures saying if there is a mismatch of the statements of poll his party will demand a recount of the ballots.

Ali made the comments during a news conference hosted by his party. He was supported by a number of the party’s top leaders. Ali said that the PPP/C has its numbers and is not prepared to let go of its own results which show that they would have won the General and Regional elections. “We have our numbers and our numbers would have shown clearly that People’s Progressive Party would have won the elections,” he said.

He said that for the nine districts, a part from Region Four, GECOM’s results for the General Elections are consistent with theirs. However, when he read out the votes he claimed to have sourced from GECOM’s website on the nine Regions, they were found by this newspaper to be inconsistent.

It is unclear where the PPP/C’s Presidential Candidate would have gotten these results from as the newspaper asked twice whether he would have sourced the same from GECOM’s website and they were in reference to the General Elections results, – to which he replied in the affirmative.

Nonetheless, back on the topic of the outstanding declaration of the SOPs of Region Four, Ali said that if the SOPs are brought by the RO and they do not match that of the PPP/C’s, the party will demand that the commission abide by what are in “the boxes”. “Well then [in that case] you have to go to the boxes and that is what we made clear last night with the CARICOM officials too that the gold standard is the boxes. If there are major differences then you have to go to the boxes,” he said.