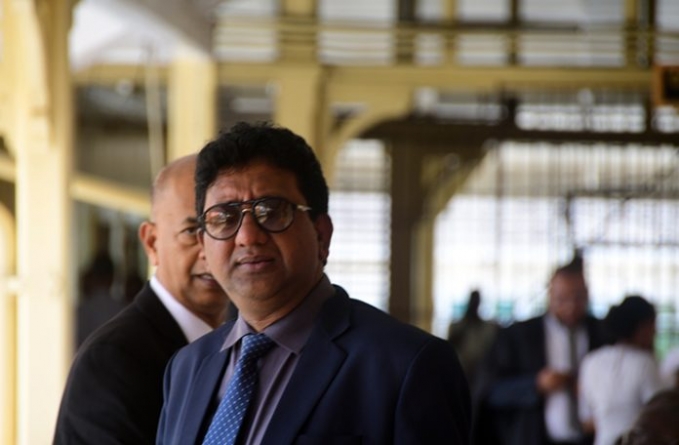 IN the coming days, the High Court will determine whether it has jurisdiction to hear the Fixed Date Application (FDA) filed by Ulita Moore to block permanently, the Guyana Elections Commission (GECOM) from facilitating a national recount of all the votes cast during the March 2 general and regional elections.

Based on that decision, which will be handed down by Justice Franklin Holder, the court will then decide whether or not it will proceed to hear arguments on the application filed by Leader of the People’s Progressive Party Civic (PPP/C) List of Candidates, Bharrat Jagdeo, for GECOM to produce the Statements of Poll (SOPs) for the votes cast in Region Four (Demerara-Mahaica) during the elections.

The issue of jurisdiction in the case Ulita Moore vs GECOM; its Chairman, Justice (Ret’d) Claudette Singh; and the Chief Elections Officer (CEO), Keith Lowenfield, arose on Tuesday when Justice Holder took the bench to adjudicate over the Application for Discovery, which was brought by Jagdeo, in an attempt to have the Guyana Elections Commission produce the SOPs.

During the initial stage of the hearing, Jagdeo’s Attorneys – Trinidad’s Senior Counsel, Douglas Mendes, who appeared via Skype, and Anil Nandlall – challenged the court’s jurisdiction to hear the case brought by Moore. Moore is being represented by Grenadian Queen’s Counsel, Dr Francis Alexis; Attorneys-at-Law John Jeremie S.C., Keith Scotland out of Trinidad and Tobago, and Guyanese Lawyers Mayo Robertson and Roger Yearwood.
Outside of the High Court, Moore’s Attorney, Mayo Robertson, told journalists that in light of the issue of jurisdiction raised by Senior Counsel Mendes, Justice Holder took a decision to defer the ‘Discovery Application.’

Nonetheless, Robertson made Moore’s position clear that the High Court has jurisdiction to adjudicate over her case. “We firmly believe that the court has jurisdiction [to hear the matter] that’s why we brought the action in the first place,” the attorney said.
Senior Counsel, Neil Boston – the attorney representing the Chief Elections Officer – told journalists that given the issue raised, it is important for the court to establish first, its jurisdiction before proceeding with any other related matter, including the Discovery Application brought against GECOM. He posited that to do the opposite, would be to waste the court’s time.

However, Nandlall, one of the attorneys representing Jagdeo, told journalists that he had hoped that the court would have heard the Discovery Application before deciding on its jurisdiction to adjudicate over the matter, although his client’s application stemmed from Moore’s FDA.

“We…said the court, at some point in time, perhaps after the Discovery Hearing is concluded, will have to address its mind to whether it can entertain Ulita Moore’s matter because that matter questions decisions made by the Guyana Elections Commission,” Nandlall told journalists.

However, Justice Holder took a decision to address the issue of jurisdiction first before treating with all other related matters currently before him. Nandlall and Senior Counsel Mendes have until 14:00hrs today (Wednesday, March 25, 2020) to file their written submission while Moore’s lawyers have until 14:00hrs on Thursday, March 26, 2020 to file their reply. The case has been adjourned to Friday, March 27, 2020.
THE SOPS
Meanwhile, Nandlall told journalists that were GECOM to produce the SoPs currently in the possession of the Chief Elections Officer to the court, such a move would resolve the current controversy over the reported lack of transparency in the tabulation process that was employed by the Region Four Returning Officer, Clairmont Mingo, before his declaration of the votes cast in his electoral district.

However, he expressed surprise and disappointment at the Chief Elections Officer’s objection to such a request. We felt that those [SoPs] would have been the cleanest and most genuine statements of poll that can be used to resolve the issue of the controversy. Now one could have expected that in ordinary circumstances that the Chief Elections Officer, being part of an impartial body, being the Guyana Elections Commission Secretariat and also the statutory officer and also the custodian of all documents in relation to elections, he would have been most anxious and most willing to allow his statements of poll to be scrutinised by everyone including the court in order to arrive at a solution to the controversy. Unfortunately, the Chief Elections Officer takes a position that is totally inconsistent with that,” Nandlall complained.

While falling short of stating the legal basis on which the Application for Discovery was made, Nandlall told journalists that his Client wants the High Court to establish whether or not the Returning Officer on March 13 used the correct SOPs to tabulate the votes for his Electoral District. “If Lowenfield’s Statements of Poll are produced, [it] can be easily established that the RO was not using the Statements of Poll; he had to have been getting those numbers from some other source, and that is the bone of contention,” Nandlall posited.

However, were the court to order GECOM or the Chief Elections Officer to produce the SoPs, it would have to tabulate all the votes cast in District Four, to determine whether there was variation in the votes declared by the Returning Officer on March 13, and the total number of votes it arrived at for each List of Candidates. To engage in such an act would be to usurp the independent and constitutional powers of the Guyana Elections Commission in the supervision of the country’s elections.

But Nandlall believes that the coast has already been cleared for such tabulation to be done by the court. “Tabulate means adding up; and the court has already taken jurisdiction over the RO’s function to say they can review the RO’s function as contained in Section 84 [of the Representation of People Act], and the RO’s function entails tabulating and adding up,” Nandlall further submitted, but told the press that he cannot say what the judge will or will not do. On Monday, the Chief Elections Officer’s attorney told journalist that the Discovery Application brought by Jagdeo ought to have been brought by way of an Elections Petition within 28 days of the declaration of the results for the General and Regional Elections by GECOM. That aside, Chief Elections Officer, in his affidavit in deference repeatedly indicated that at all material times, the returning officer and his assigned elections officers and clerks were using SoPs during the tabulation process and not a spreadsheet as alleged by the PPP/C and other parties.