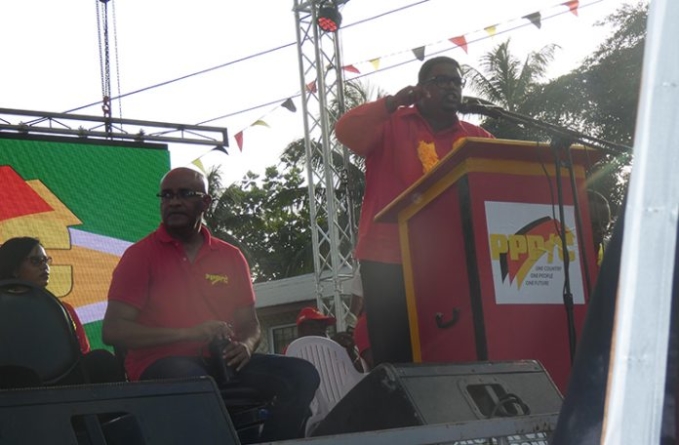 Taking credit for projects that did not materialize prior to 2015, the People’s Progressive Party/Civic (PPP/C), on Sunday, presented to the people of Linden, and, by extension, Region 10, a number of plans, almost identical to those being executed by the current A Partnership for National Unity + Alliance for Change (APNU+AFC) Administration.

Addressing a small crowd of people, drawn from riverine communities and other parts of the country, the PPP/C sought to inform the populace on matters of regional and national interest, during their elections’ rally in Wismar, Linden.

PPP/C Executive Member, Bishop Juan Edghill, in his address, accused the APNU-AFC Government of closing down the Kara Kara Call Centre but records would show that contention is far from the facts.

The Kara Kara Call Centre was established by Toucan Connection Enterprise – a private company based in St Kitts. When the call centre closed down in 2015, the APNU+AFC Government intervened and made representation on behalf of the affected workers. Committed to creating jobs in Linden, the Government recently signed a contract for the call centre to be refurbished – a move that will see 150 Lindeners gaining employment.
The Prime Ministerial Candidate, Mark Phillips, said, contrary to popular beliefs, he was born in Linden. In the lead up to elections, Phillips said he will visit a different community every week. 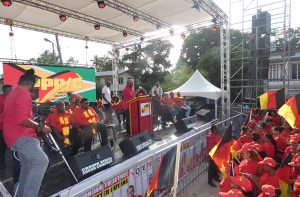 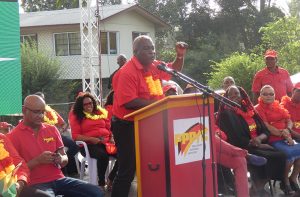 According to him, the PPP/C pumped a lot of financial resources into Linden between 1992 and 2015. He contended that emphasis was placed on education, healthcare delivery, and roads. In his bid to cite examples, Phillips said under the PPP/C a hospital was constructed in Ituni but there is no such facility in the logging community.

He also boasted of repairs being executed at the Christianburg Wismar Secondary School (CWSS) but it was not so long ago that the Principal of CWSS, Cleveland Thomas, complained that the school was neglected for decades and was in a dilapidated state. CWSS benefited from massive repairs under the regional educational programme in 2018.
PPP/C’s General-Secretary, Bharrat Jagdeo said that despite not having a lot of support from Linden, the PPP has a track record all because of perseverance.

“The new housing schemes of Amelia’s Ward, Block 22, I walked on those pieces of land when there was nothing there and we now have thriving housing schemes with thousands of people living there, because of the People’s Progressive Party. We promised to build a new hospital and we kept our promise and we spent over $2B on building a new hospital for this region. We believed and kept our promises. When we came here and found that there were no jobs…..we set up LEN, we set up LEAF, we started building roads in West Watooka, we started looking at the riverine areas for better health care, we have a track record,” he pointed out.

PPP/C’s Presidential Candidate Irfaan Ali told the small group of people that should the party return to Government, it will use revenues from the Oil and Gas Sector to promote agriculture, logging and mining. In agriculture, he said that PPP/C will invest in farm to market roads, access to farm lands and farming infrastructure.

Ali asked the supporters to vote not on race but on conscience, contending that the Government did not add a single new house lot, distributed no land titles or build any new health centres in Region Ten, since 2015.

However, since 2015, over 400 house lots in addition to housing units were allocated to residents there while Amelia’s Ward now has a spanking new modern health centre. Over 600 residents were also presented with land titles from NICIL and CH&PA.

The PPP also rallied on the promise to return the student cash grant to parents and to raise it to $50, 000 as well as to raise old age pensions if they return to office.

The gathering was also introduced to the geographical candidates, two of whom are Municipal Councillors, Sherry Fyfe and Regional Councillor, Dexter Harding.