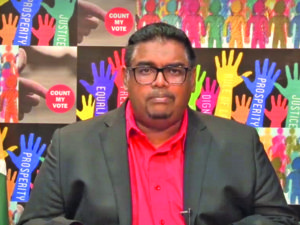 The People’s Progressive Party (PPP) has formed a task force – COVID-19 Response Multi-Stakeholder forum – that includes various members of the party, who have medical training and former Health Ministers

In a video broadcast via social media on Saturday, the PPP’s Presidential Candidate, Dr Irfaan Ali announced that the task force was formed out of necessity. He noted that not enough information and action is being filtered out and taken by health and other authorities.

For now, the task force will seek that information and provide updates, the next one scheduled for Monday. But Dr Ali also outlined the various measures that the task force would do should the PPP enter office, even as the election results remain in limbo weeks after Guyanese went out to vote.

“The medical and frontline workers, because they are exposed. How do we ensure that they have safeguards? Accessibility to food. Tax relief measures to help businesses. To ensure there is money in people’s pockets to survive this difficult period not only in the immediate but long term.”

On the task force team are doctors Frank Anthony and Vindhya Persaud. Former Ministers of Health Dr Leslie Ramsammy and Gail Teixeira are also on the task force, as well as PPP candidate Hugh Todd. It was made clear that the task force will seek the involvement of all stakeholders, including the various political parties.

Meanwhile, Dr Anthony is of the view that Guyana does not have enough testing kits, nor a comprehensive enough plan to tackle the coronavirus and deal with the economic fallout. According to Anthony, 700 test kits are not enough. He also noted that the Government has not provided enough personal protection equipment to the health care workers

The former shadow Health Minister further outlined the risks the virus poses particularly to vulnerable demographics. According to Dr Anthony, enough contact training to track persons who were exposed has not been done. He noted that persons who are trained for this are not being used.

“We have a number of doctors who are assisting us. And we are going to be working to provide advice. We are going to be seeking information to ensure that we understand how this pandemic is unfolding in Guyana. And we’ll be asking the health authorities for more information. 80 per cent of those persons infected will have no signs or symptoms. Another 19 per cent will probably have the disease in a moderate way.”

“And those persons may include persons over the age of 80. Persons with underlying, chronic disease such as high blood pressure and diabetes, asthma and other respiratory conditions, they would be more vulnerable. We want people to pay special attention to this. We know that we have close to 60,000 persons with diabetes in Guyana.”
He added that judging from the pattern of infection around the world, there would likely be a one per cent of persons from the victim pool who would develop a more severe form of COVID-19. Such persons could develop viral pneumonia