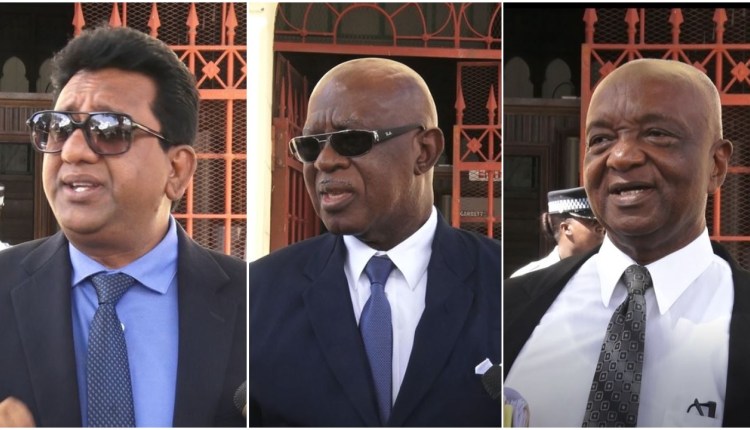 The People’s Progressive Party has moved to challenge whether the High Court has the authority to hear a case filed by APNU+AFC regional Candidate Ulita Moore to block the Guyana Elections Commission (GECOM) from moving ahead with a national recount.

The jurisdiction argument came up on Tuesday as the Judge, Justice Franklyn Holder, was hearing an application filed by PPP’s General Secretary Bharrat Jagdeo requesting that the Chief Elections Officer Keith Lowenfield display all of the Statements of Poll (SOPs) for Region Four –Guyana’s largest and most contentious voting district –in court. Jagdeo is represented by Senior Counsel Douglas Mendes and Anil Nandlall.

The matter was held in the Judge’s chambers [meaning not open to the public] but Nandlall told the media that “Ulita Moore’s lawyers raised the issue about whether the court can order the Statements of Poll and then we countered with a jurisdiction issue ourselves and we said the court at some point in time…will have [decide] to whether it can entertain Ulita Moore’s matter because that matter questions decisions made by the Elections Commission.”

He stated that decisions made by GECOM under the Representation of the People’s Act cannot be inquired by any court.

The judge decided that it will do him no good to rule on whether the court can request the SOPs before the application challenging the court’s jurisdiction since if the court does not have jurisdiction to hear the matter, all other applications would be useless.

Moore filed her case on March 18 as GECOM was putting final measures in place to move ahead with the national recount which was initiated by her party’s leader President David Granger, Mr. Jagdeo and CARICOM. She is represented by Senior Counsel John Jeremie and Francis Alexis and Attorneys Roysdale Forde, Keith Scotland and Mayo Robertson.

Robertson disagreed with the argument that the court does not have jurisdiction to hear the case but did not disclose his arguments.

“We firmly believe that the court has jurisdiction so that’s why we brought the argument here in the first place…” he said.

Asked what his arguments are, he said “you’re going to hear them when we get back to court. Our submissions will be put in as the court ordered by Thursday.”

Attorney Neil Boston who is representing the Chief Elections Officer Keith Lowenfield said the jurisdiction arguments now delays all other hearings in the matter.

He supported arguments that the court indeed has jurisdiction to hear the matter but did not disclose his contentions.

It has been three weeks since Guyanese cast their votes at the polls and are awaiting a final declaration of the results.

The decision on the jurisdiction case is expected at 09:30hrs on Friday.