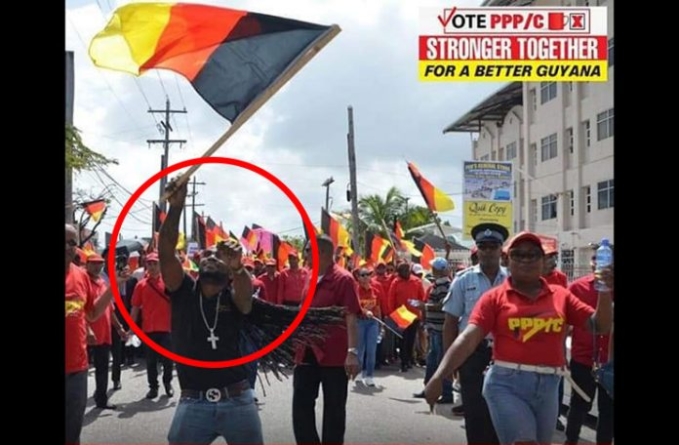 The Ministry of Education (MoE) and the Guyana Teachers’ Union (GTU) will be supporting the instituting of criminal charges against the attackers of the St Agnes Primary teacher, who was assaulted on Wednesday by alleged candidate of the People’s Progressive Party/Civic (PPP/C), Sherwin Dalrymple and others.

The ministry also noted that it will be working towards measures to prevent such occurrences in the future. In a widely discussed viral video of the incident, Dalrymple, of Campbellville, and an employee of Sleep Inn International Hotel, is seen circling and kicking the teacher, and pulling her hair, as someone in the background eggs him on. The incident took place in a classroom of the Georgetown public school.

At least two young pupils of the school were witnesses to the entire episode of the assault, as seen in the video. In one of the posters for the PPP/C, Dalrymple is seen leading the party’s procession on Nomination Day, January 10, when the party submitted its List of Candidates to the Guyana Elections Commission (GECOM). “These people no good,” noted Kerry Sandiford, an observer, as she and others questioned the type of individuals the party associates with.

The MoE and GTU released a joint statement on Thursday denouncing the situation. “The MoE, in collaboration with GTU, wishes to react to the unfortunate and absolutely abhorrent incident which took place at the St. Agnes Primary School [on] January 15. At no time and under any circumstances would any form of violence in schools be condoned, especially when our pupils and teachers are involved,” the statement said.

“Any criminal act perpetrated by any parent or other person of the public on teachers, pupils or any member of the Education sector ought to be meted out with the fullest extent of the law. The Ministry has taken the position to assist victims in their pursuit of criminal proceedings against perpetrators in instituting the appropriate criminal charges. The Ministry and GTU offer their full support towards the prosecution of these assailants. The public is assured that as investigations are underway, some crucial decision will be taken and instituted in an effort towards ensuring that incidents of this nature would not be repeated.”

The assault developed from a meeting between the teacher and parents to discuss another assault situation, whereby Dalrymple’s child, in similar fashion to his father, is said to have kicked another pupil, who was severely injured and had to be taken for medical attention. “The police need to make examples of both of them; no wonder the child they are grooming allegedly kicked the other child in the school. He’s doing what he’s used to seeing around him,” another observer noted.

That assault between the pupils took place on Tuesday. The injured pupil’s parent had to seek private medical attention for their child. The head of the school had arranged a meeting, on Thursday, between the injured child’s mother, and the other pupil’s parents.
Dalrymple and his wife, and an aunt of their child went to the school and is alleged to have verbally abused the teacher during the discussions, before his wife charged at her and began to physically assault the teacher, according to witnesses. The teacher subsequently retaliated.

In the video, the aunt is seen being restrained by another teacher, at the door of the room. The teacher and parent have since made reports to the police and sought medical attention.

The assault comes just months after another teacher, of the Winfer Gardens Primary School, was also assaulted by a parent, so severely that she required stitches for a head wound. The MoE and GPF are said to be investigating both incidents. With the GTU and MoE still in discussions for a new three-year agreement, which would include negotiations for salary and other issues, GTU General Secretary had noted that in light of the severe risks teachers face, the Union will be lobbying for a risk allowance.

““In this new proposal, we’re asking for risk and emotional allowances for our teachers. We’re asking for that because we’re recognising teachers across this country, they’re exposed to all sorts of things,” GTU General Secretary, Coretta McDonald had said.