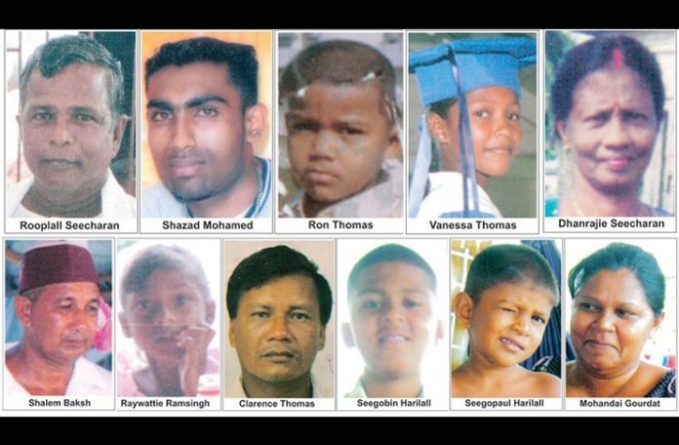 An event on Sunday meant to remember the 11 persons who lost their lives in the 2008 Lusignan Massacre was completely politicised with talk about elections and scapegoating by Opposition affiliates invited to speak at the function.

The event, ‘A Night of Remembrance’, took place at Track ‘A’ Lusignan Pasture, the street where the incident occurred, and was hosted by the Indian Action Committee (IAC) in collaboration with Panko Steel Fabrication.

However, the event largely took on the nature of a political rally, where noted People’s Progressive Party (PPP) officials used the podium to bash the government.

Delivering remarks on behalf of his party was PPP Member of Parliament (MP) Anil Nandlall, who first conveyed his sympathy to the relatives of the deceased and those who survived.

He then went on to say that such a cruel act stands the chance of reoccurring if it is not condemned, before launching into micro-aggression mode by stating that the act was a planned attack by the people of Buxton, a predominantly afro-Guyanese community, on a poor Indo-Guyanese community.

“These people came from Buxton; that is what the historical data shows,” Nandlall said. “They left Buxton; they left Annandale South and they came here. Robbery could not have been the motive, because these are some of the poorest people living in our community; look at the homes. And nothing was taken from them; there was no loot. They came to slaughter and murder,” he told members of the still grieving Lusignan community.

Nandlall then proceeded to accuse the People’s National Congress (PNC) youth arm, the Young Socialist Movement (YSM) of giving guns to bandits who did killings.

“The army handed over to the YSM, the youth movement of the PNC, machine guns; hundreds of them. And those machine guns were subsequently found in the hands of bandits,” Nandlall told the people at the service.

VOTE CHANGE
Shortly after his lengthy remarks on the YSM’s purported role in the spate of killings that occurred in the country around the time of the Lusignan Massacre and after, he proceeded to accuse the Coalition government of using the Lusignan Massacre and other historical tragedies as a “political football”, then went on to urge the people to vote for a change in government.

“We will never be able to address these matters objectively if we contaminate them, and we allow politicians to contaminate them with biases and prejudices,” Nandlall said, later urging:

“The No-Confidence Motion is a power that you the people have, reflected in your leaders elected to the parliament, to remove a government before an election time if a government misbehaves.”

Also at the Remembrance Service was Chartered Accountant-turned-Attorney Christopher Ram, who also used the forum to lecture on several political matters in relation to the upcoming elections; the no-confidence motion; Guyana’s political future; and his displeasure with the current administration.

He spent 90 per cent of his 13-minute speech urging the audience to decide on the type of country they want, moving forward, while alluding to leaders such as President David Granger, Prime Minister Moses Nagamootoo and Prime Ministerial Candidate Khemraj Ramjattan.

He told the people not to see the matter as having to do with race, but a struggle for justice and their right to choose the leaders they want for a better future.

Earlier on, remarks came from son of Opposition MP Juan Edghill, Juan Edghill (Jr.) who expressed condolences to the loved ones of the 11 slain on behalf of his father, but then referred to what occurred as “a crime of hate”.

He made a call for national unity and reconciliation, noting that agencies such as the Guyana Police Force (GPF), the Judiciary and the Ethnic Relations Commission (ERC) have a special responsibility to promote the peaceful resolving of issues.

Edghill (Jr.) also encouraged that as citizens remember the ‘Lusignan 11’, they also spare a thought for those who lost their lives in the Bartica and Lindo Creek Massacres.

When Minister within the Ministry of Public Infrastructure Jaipaul Sharma rose to speak on behalf of the government, he corrected Edghill, saying that the act was not one that was done out of hate, but rather out of rage; an act that can never be justified.

“This rage that I speak of wasn’t a rage that started in January 2008,” Minister Sharma said, adding: “It would have started with the slaying of a Minister of Government, the late Satyadeow Sawh, his brother and sister and a security guard. It didn’t stop there; it went on the slaying of five pressmen from Kaieteur News, and then it went on again with the Lusignan Bartica, and Lindo Creek Massacres. This is a rage. This is not hate; this is anger.”

And although Minister Sharma advised against making remarks apportioning blame to a specific race at a vulnerable time as this when Guyana is preparing to head into new elections, Nandlall seemingly couldn’t care less as he nonetheless went on to play the blame game and more.

In his address, Minister Sharma assured the survivors of the Lusignan Massacre that the government will continue to lend its support, and commended them for showing strength by seeking to adopt positive coping mechanisms.

EVER-VIGILANT
He also called on the present-day members of the GPF to be vibrant and swift in their response to reports of criminal activity, as this can be the difference between life and death.

Present and making remarks at the remembrance event was a Commissioner of the ERC, Rajkumarie Singh, who’d made remarks prior but witnessed the various speeches.

She offered condolences, and urged Guyanese that while the ERC, as a body, has a responsibility for promoting harmony in Guyana, this is also the duty of every Guyanese.

The ERC, just over a week ago, warned political parties contesting the 2020 General and Regional Elections against being “mechanisms for division” and to ensure that their actions are “transparent, free of hate, violence and racial or any other forms of incitement”.

While the newspaper attempted to verify whether the event met the ERC’s ideals, it was unsuccessful.