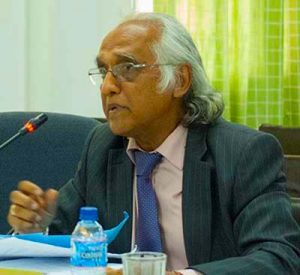 Dear Editor,
The descent into sporadic but geographically widespread violence following last Monday’s General and Regional Elections is a most regrettable and dangerous development in this country.

Our political leaders must elevate the national interest above that of their party. This requires empathy, understanding and courage in order to protect our country’s hard won but still developing democracy.

Those participating in such violence, no matter the cause of their actions or the depth of their emotions, must realise that violence begets violence. Our society and communities are too integrated for such violence not to have catastrophic consequences for themselves and the country.

It is widely acknowledged that the voting process across the country, including in Region 4, was efficiently executed, fair and near flawless. In all but Region 4, the accounting, recording, tabulation and transmission of the results were timely and proper. It is hard to understand why the Region, which includes our capital city, the National Assembly, and the headquarters of the Elections Commission, could be the subject of such confusion.

I have spoken individually with a number of colleagues from the legal, accounting and business communities who took an active part in the incomplete verification process. Arising from those conversations, I strongly believe that the PPP/C won a clear majority in these elections. It should not be difficult to establish whether this is so or not by following the statutory process. That should be done without delay, and ought not to have brought the Courts into the matter. Whoever emerges as the winner from this election will only enjoy credibility and confidence if so verified and determined according to the Constitution and other laws of the country.

To the winner, the result should signal the sharpness of our division and the need to act decisively to ameliorate this. To the loser, they simply cannot ignore the reality of the results or get a makeover.

For Guyana to change Governments twice in five years should be welcome as democracy in operation and confirmation that democracy is taking root in Guyana. It did in 2015, and if protected, will do so again in 2025.

In my view, both President Granger and Opposition Leader Bharrat Jagdeo could and should have acted more responsibly following the elections. Had they done so, the escalating problems could have been avoided. But it is not too late, and they must show statesmanship, maturity and leadership to avoid further loss of life, limb and property. They both must control their supporters, not encourage and mislead them.

As important in this process is the Guyana Elections Commission (GECOM). The Constitution imposes on GECOM a power and a duty to exercise general direction and supervision over the conduct of elections, and to issue such instructions and take such action as necessary to ensure impartiality, fairness, and compliance with the provisions of the Constitution.

In a highly partisan and evenly divided GECOM, Chairperson Justice Claudette Singh must conduct herself with courage and wisdom, not only to protect and comply with the Constitution, but also the interest and future of this country. She, probably more than the major political parties, must recognise the danger of a return to communal strife, the prospects of sanctions by the international community, and the squandering of the windfall from petroleum revenues. She is wise enough to know that the premature announcement of the results of the elections can lead to Guyana being isolated and ostracized by the international community, even as it faces an existential threat from neighbouring Venezuela.

Justice Singh must ensure that the remainder of the declaration of results leading to the swearing in of the President is strictly complied with. This is without doubt the most important judicious decision she would have ever had to make. The future of our Republic will be determined by Justice Singh’s decision to honour and comply with the process.