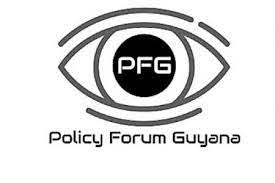 The Policy Forum Guyana (PFG) has launched its advocacy training kit, which is aimed at helping young people, indigenous youths in particular, to address common issues and ways they can deal with it.
According to a press release, the training kit is called, “Living in Harmony with Nature & Society” and it contains a manual named ‘Freshwater’ which highlights the environment, sexual violence, epidemics, fairness and protection.

It should be noted that hard copies of the kit are limited in number but a soft copy is available on the PFG website, which any interested person is welcome to access.
The manual contains examples of effective activism by communities, indigenous organizations and other non-governmental and governmental agencies over the past decades.

The release stated, that the aim of the manual is to distinguish that integration between coastal life and interior communities is drawing the younger generation progressively into coastal habits, values and ways of doing things. It added that it was evident for youths studying on the coast, and for those who remain in their communities as a result of better roads, social media, mining and forestry as well as tourism.
PFG said that the manual is a contributor in helping with discernment, providing educators, youth leaders, indigenous organizations and faith-based groups with tools to encourage wise decision-making for the protection of the well-being of communities.

The release also highlighted that, “While better health and education and job opportunities may result, the cost of the ‘integration’ process is also to be calculated in terms of undermining traditional indigenous values and lifestyles.”
The training kit was developed from the work undertaken over three years under the patronage of the “Shared Resources Joint Solutions” programme.
Another guiding principle in the selection of materials was the inclusion of lesson plans addressing relationships: with the natural environment; inter-personal relations; relations with strangers and inter-generational relations.

Materials that have proven to be effective in combatting earlier epidemics of malaria and alcoholism in indigenous communities are also included in the manual.
According to the release, the kit benefitted from materials produced by Rights of Children (ROC), the East Coast Clean-Up Committee, the Guyana Human Rights Association and the Upper Mazaruni Christian Council.

In addition to recognizing the support of the World Wildlife Fund (WWF) and the International Fund for the Conservation of Nature (IUCN) the PFG wished to express its appreciation to a number of local agencies.
The Science Advisor to the National Centre for Education Research & Action (NCERD) provided valuable guidance with respect to the Freshwater Manual. Teachers from Graham’s Hall, Eccles and Seafield Primary schools assisted in reviewing the appropriateness of the materials for primary schools.