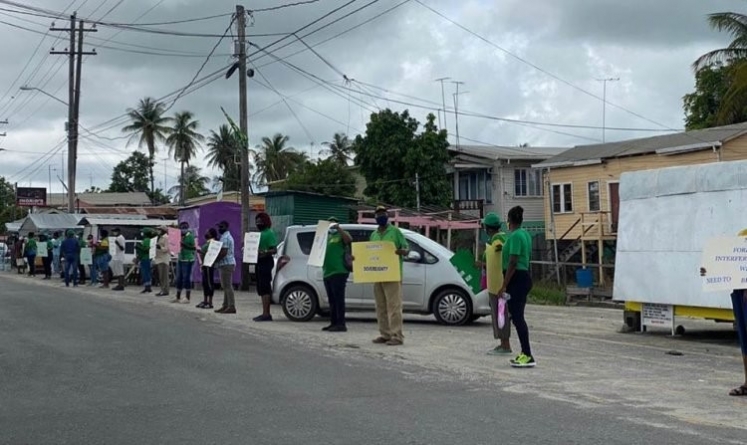 The police will be taking action against supporters of the incumbent APNU+AFC coalition, who breached the COVID-19 measures by participating in a number of protests across the country on Monday.

On Monday morning, the supporters gathered in groups at areas such as Friendship and Plaisance on the East Coast of Deme-rara, Mandela Avenue in Georgetown, Agricola on the East Bank of Demerara and in Linden to argue that the Caribbean Court of Justice (CCJ) has no jurisdiction in the elections-related case on which it is scheduled to rule today.

Stabroek News yesterday reached out to the Regional Commanders of the various policing divisions where the protests took place and they said that no permission had been granted to stage the protests.

They said that the police dispersed the gatherings and while no arrests were made, appropriate actions will be taken against those who were involved in the exercise.

Commander of Region 4(A) Phillip Azore told Stabroek News that following the warning, the groups took some time but eventually dispersed.

“They were asked to disperse under Section 1 of the COVID-19 regulations which states that they should remain in the confines of their home and yards,” Azore said.

He added that the protests were recorded on video and the police will embark on the process of identifying the individuals who were present after which summonses will be issued for them to appear in court.

Assistant Commissioner Royston Andries-Junor, who heads Region 4(C) said that upon arriving at the Friendship and Plaisance areas where the protests were being held, the police engaged the leaders of the groups.

“We asked them to desist and to get the people to go home which was successful,” Andries-Junor said.

He, too, noted that the protests were videoed and the police will be seeking advice on the way forward at a later date.

Meanwhile, Comman-der of Region 10, Hugh Winter said that a group of about 17 persons gathered in front the People’s National Congress Reform (PNCR) office in Linden.

Winter related that when the police arrived at the location, they engaged the protesters after which they dispersed.

“Basically the police spoke with them and they dispersed,” he said.

Winter explained that in terms of charges, the police will first have to obtain information about the protesters from the leader.

“The charging, definitely we will have to get the information from the leaders because not everybody may know the persons that were there and thereafter a decision will be made,” he stated.

The CCJ is scheduled to deliver a ruling at 3pm today on an appeal related to the March 2nd elections brought by PPP General Secretary Bharrat Jagdeo and PPP/C presidential candidate Irfaan Ali.

Jagdeo and Ali are appealing a Guyana Court of Appeal (CoA) decision which sought to embrace the word “valid” in provisions of the constitution addressing the election of a President.

The Court of Appeal ruling also sought to draw a nexus between Order 60 dealing with the recount and the word valid.

When it hands down its decision today, the CCJ panel headed by Justice Adrian Saunders will first have to rule on whether it has jurisdiction in this matter.  Counsel for APNU+AFC has argued that the CCJ has no jurisdiction as Article 177 gave exclusive jurisdiction to the CoA.