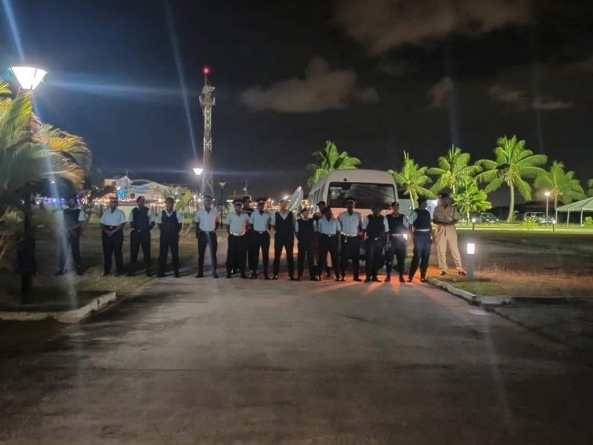 Police officers from the riot squad have threatened to arrest representatives of the various political parties and observers who are at the Arthur Chung Conference Centre where the national recount of votes from the March 2 polls is scheduled to take place.

The threat came after the party representatives and the observers were hesitant to adhere to the Police request to vacate the compound which now houses the containers with the ballot boxes.

As a matter of fact, PPP nominated GECOM Commissioner, Robeson Benn refused to leave the compound and actually laid on the ground in protest.

The management of the conference centre also turned off all the lights in the building.

Opposition Leader Bharrat Jagdeo and several Presidential Candidates for small political parties said their agents were instructed to leave after a team turned up to fumigate the building.

“Many of our leaders who have been there waiting for the recount to start are being asked to remove out of the compound, not out of the building but they’re in the yard of the massive compound of the convention centre,” Mr Jagdeo said at a press conference on Monday evening at Freedom House, Robb Street.

Presidential Candidate for The Citizenship Initiative, Rondha Lam who has been at the Centre since Monday midday when the recount was slated to begin, said the building was being fumigated for ants. This process she noted started in the evening.

At 19:15hrs, she said in a Facebook post “riot police on the scene have requested everyone to leave the centre or they face the possibility of arrest.”

The building is expected to be closed until 09:00hrs on Tuesday but Jagdeo said the PPP will keep a vigil outside to ensure the sanctity of the ballot boxes.

Other party representatives have committed to remaining at the location all night as well but after much back and forth a decision was made to allow one representative each from a political party inside the building.