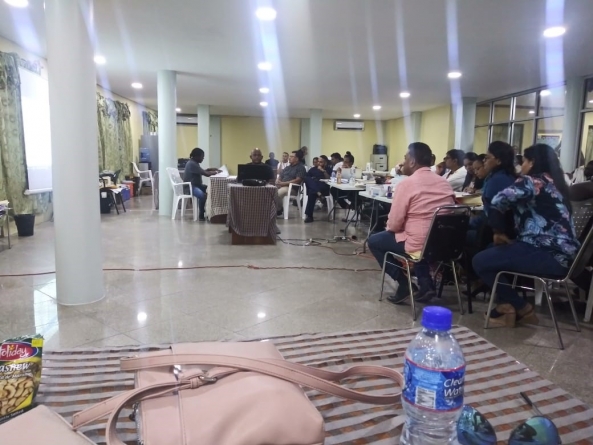 Verification of the statements of poll (SoPs) for Region Four is to resume today following a major commotion this morning that saw the Police being called in to investigate reports that a data entry clerk had a suspect flash drive and lap top in his possession.

This was the fifth interruption of the verification process at the High and Hadfield Sts office of the Region Four Returning Officer since Tuesday. Yesterday a suspect spreadsheet had triggered consternation.

The process for verification of Region Four’s SoPs had been delayed last night and into this morning after GECOM staff complained of being tired and exhausted. Region Four is the only region outstanding from Monday’s general and regional elections.

In the latest controversy, the GECOM data entry clerk after going through the process with a few SoPs declared that he was tired. He was then alleged to have taken a flash drive containing verification data.  Party representatives quickly intervened and the police were called in. They then conducted a lengthy questioning of the clerk and listened to what the party representatives had to say.

Presidential Candidate of the Liberty and Justice Party, Lennox Shuman told reporters this morning that at around 3.45 that they discovered that there was vast difference between the data the parties agents had in their possession and what was projected on the screen. He stated that they had left off at the SoPs from the East Bank District but when the data was projected on the screen it was Georgetown data which they had not looked at.

This, he explained, created an uproar leading to the process being stalled further and the Chief Election Officer (CEO) Keith Lowenfield being summoned.

The police were also called in at that point.

Lowenfield after meeting with the party representatives made the decision that all documents will be printed and presented to the representatives to eliminate further concerns about altered data arising at the continuation.

“We have a commitment from the CEO that we will get a printout of what has been done so far, We will also get a printout of (East Bank, East Coast, Georgetown) results when they are completed and, of course, for each party to verify, authenticate, check, examine those reports and once they are found to be acceptable, they will be merged into an aggregate report that will constitute the RO’s (Returning Officer’s) report to be transmitted as the results in this region to the Chief Election Officer as is required by law,” Anil Nandlall, an executive member and Election Agent of the PPP told reporters who were present at the returning office at around 5 am.

Lowenfield when he spoke with reporters also echoed similar comments and stated his commitment to having the process completed.

Asked what was the percentage of data already verified, Ali responded “it is very hard to determine a percentage  because we are going back to issues with the inputting… when we started back the process we were at number 40 for the East Bank .”

He stressed too that he could not put any timeline to the completion of the tabulation of the results.

“I can’t give a time frame I don’t know what will arise or won’t arise tomorrow,” he noted.

He further told reporters that they have received the commitment from Lowenfield to have contingency staff in place to prevent any repeat of yesterday’s staff shortages  and get the process completed.

Throughout the uproar, there was no representative from the APNU+AFC coalition. Assistant Election Agent for the party James Bond showed up later but the commotion had already blown over.