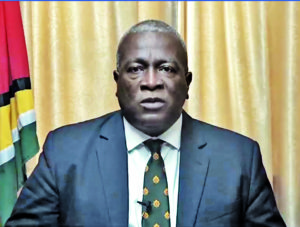 People’s Progressive Party/Civic (PPP/C) Prime Ministerial Candidate, Retired Brigadier Mark Phillips has urged the Guyana Defence Force (GDF) and the Guyana Police Force (GPF) not to follow any “unlawful orders” while noting that the PPP/C won the March 2 General and Regional Elections and “must be allowed to govern in peace”.

Brigadier Phillips, a former Chief-of-Staff of the GDF, was at the time commenting on the ruling by the Caribbean Court of Justice (CCJ) on Wednesday, which paved the way for a swearing-in of PPP/C Presidential Candidate, Dr Irfaan Ali as the next President of Guyana, after the Party won the majority of votes in the March 2 polls.

“I want to speak to the security forces, the Guyana Defence Force and the Guyana Police Force, they have an important role to play in upholding the rule of law during this critical time in Guyana.
“These Forces must not follow any unlawful order. We have a president and that president will soon be replaced by another president in keeping with the declaration of GECOM.

Brigadier Phillips noted that he joined the PPP/C in January this year and the Party launched a powerful campaign in which it took its messages to the masses and the electorate showed overwhelming support in return.
“The people voted for the PPP/C, and the PPP/C must be allowed to assume office in this country peacefully in keeping with the laws of Guyana, so that Guyana can once again be respected by the wider Caribbean, by the wider Western Hemisphere and by the world,” he posited.

According to Phillips, it is important that peace and order are maintained in the country. He noted that Guyana was a democracy and regardless of how fragile it was, it must be allowed to prevail.
He further noted that Guyanese suffered quite a lot during the period of rigged elections in the Linden Forbes Burnham era, which affected the development of the country in many ways.

“We must not go back to the days of rigged elections. That is something of the past; the system was reengineered for the 1992 elections. And that is the system we used from 1992 to now, and it’s difficult to rig post 1992.”
“Mr Lowenfield is on record as saying … that it is difficult to impersonate somebody. And to come now and have statutory officers who are supposed to be highly professional, impartial… two of these officers were caught in the act involved in the rigging or attempts to rig these elections,” the PM Candidate said.

According to Phillips, the CCJ ruling is important for all Guyanese. “Our elections at all times must represent the will of the people,” he said.
He urged the APNU/AFC to respect the decisions handed down by the CCJ, concede defeat, and allow the country to move forward.
The CCJ, on Wednesday, ruled that Guyana’s Court of Appeal had no jurisdiction to hear the matter filed by APNU/AFC supporter Eslyn David, much less interpret “more votes cast” in the Recount Order to mean “more valid votes cast”.

Not only did the CCJ overturn this ruling, but it also invalidated the fraudulent report submitted by embattled Chief Elections Officer (CEO) Keith Lowenfield to the Guyana Elections Commission (GECOM) in which he disenfranchised over 115,000 votes based on the Appeal Court’s ruling.

This decision by the regional court has paved the way for GECOM to move ahead with the anticipated declaration of the March 2 elections results.
The 33-day national recount has shown the PPP/C with a landslide victory having obtained some 15,416 more votes than its main political rival, the caretaker APNU/AFC coalition.