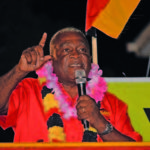 Supporters of the People’s Progressive Party/Civic (PPP/C) were last night told that there is no need for them remain at, or return to polling stations after they would have voted on elections day as the party is confident that they will emerge victorious.

Addressing a few hundred supporters at the Industry Arch Square, East Coast Demerara,  retired Brigadier Mark Phillips, prime ministerial candidate for the party, told supporters that the most important thing that they should do on that day is “place the X by the cup.”

“…place the X next to the cup and leave the polling place immediately and go back home or go back to your work because there is no need for you to lime or go home and change your clothes for you to come back at 6 o’clock… Time for that done gone, these are modern times these are different times. Put your X next to the cup and go back home,” Phillips told the gathering in the presence of election observers from the Carter Center.

Phillips, however, cautioned supporters to remain “focused” and “vigilant” in order to ensure there is an incident- free elections.

“But you must remain focused in the face of the undemocratic acts and comments with the potential of promoting violence from the APNU+AFC coalition, who is now not confident of winning this elections…Comrades we have to be vigilant to ensure that the elections are free, fair, credible and peaceful,” he advised the gathering.

The Prime Ministerial candidate made the comments in response to Chair of the People’s National Congress Reform (PNCR), Volda Lawrence, who on Sunday last urged her supporters to be vigilant and ready for the “nightshift.”

Lawrence told supporters that after voting for the general and regional elections is closed at 6 pm on March 2, they must be ready to work the “nightshift” and be watchful during the tabulation of ballots.

“And after 6 o’clock hit, comrades, you should already have your bath and put on your nightshift clothing. You understand what I am saying comrades? This is not a time to be caught sleeping; they must not catch us sleeping. At 6 o’clock, you return to work at the places of polling and you will remain out there and let our staff inside know you are out there; just let them know everything is covered APNU+ AFC,” Lawrence said. The PNCR is the largest constituent of APNU.

The party chairman instructed supporters that they must not leave polling stations until the Statements of Poll (SOPs) with the results of the voting at those locations is posted outside of the buildings by the returning officers.

Her comments have attracted widespread condemnation.

Phillips also used the opportunity to encourage supporters to stay strong despite the discrimination and unfairness meted out them at their work places by APNU+AFC supporters.

“Many of you were threatened and likely to be threatened in the future leading up the elections just because you want to attend your party’s rally and meetings in your community. But comrades, I must tell you, it is your democratic right. If you want to play a part in the defence of democracy you have to be strong and don’t be intimidated by the coalition supporters. Continue to be strong and continue to be defiant and show your support for the PPP in your numbers…” he underscored.

Shifting his attention to reasons why the party should be voted back into power, Phillips highlighted the plans outlined in their manifesto and told supporters that the only way they would be able to implement their elaborate plan, is if they go out and vote for them on March 2 and encourage others to vote for the party at the Regional and General Elections.

Phillips also announced that should his party return to government they will conduct a Commission of Inquiry into the 2016 Esso Production Sharing Agreement and other agreements leading up the “road to first oil”.

“After winning the elections we are committed to taking a bipartisan approach towards the management and development of the oil and gas industry,” Phillips asserted while stating that this government has failed to create the necessary legal framework to manage and ensure there is transparency in the sector.

Meanwhile, Presidential Candidate of the party, Irfaan Ali, in his address restated the party’s vision outlined in its manifesto “Road to Prosperity.”

The aspiring president noted that despite much backlash over the Marriott Hotel, it is being enjoyed by government officials, who had once said that they will convert the building into a hospital.

On this note, he said that when they return to government they are going to invest and provide incentives for the erection of four more first class hotels. Some of these hotels, he said will be placed on the East Coast of Demerara, a move he said will see the creation of jobs for people living along the coast.

Ali further spoke of the vision his party has and will implement in order to modernise and take Guyana forward.

He highlighted that emphasis will be placed on developing the education sector and bringing it on par with international standards. He also used to opportunity to inform the young people gathered, of his plan to make university education and other forms of tertiary education free.

The presidential hopeful also disclosed that a special policy will be formulated to write off loan debts owed by students of the university.

The public meeting also saw former President Donald Ramotar and party stalwarts Harripersaud Nokta and Indra Chanderpal along with others in attendance.