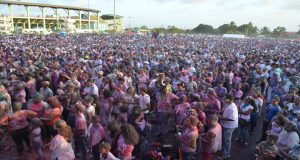 The organisers of the annual Phagwah celebrations at the Guyana National Stadium, Providence, have announced that there will be no event on Monday.

That East Bank Demerara location for the last number of years has been drawing bigger crowds annually.
In additions to sweetmeats and games, the crowds have become accustomed to sprinkler systems and artistes, including overseas-based ones.
While Dr. Yog Mahadeo yesterday did not give a reason, it is believed that the cancellation is linked to the uncertainty over the delayed results of the general and regional elections held last Monday.
“It is with deep regret and tears in my eyes that I announce, on behalf of the team, the cancellation of this year’s Phagwah Festival that was scheduled for March 9 at the Guyana National Stadium,” Dr. Mahadeo said.