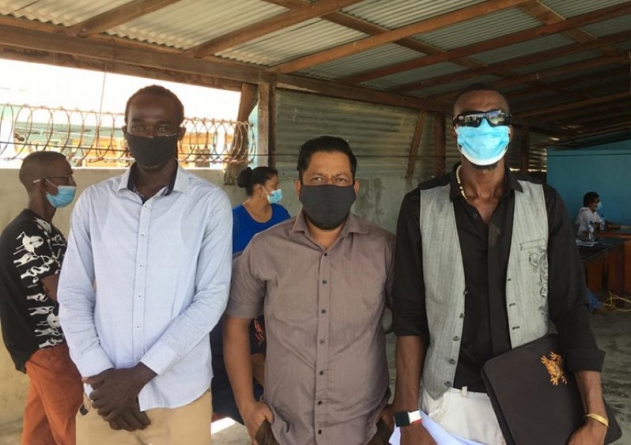 MORE than 700 farmers from across Guyana have signed up with the Guyana Industrial Hemp Association, signaling their interest in cultivating hemp for industrial use.

The Association, formerly known as the Region 10 Industrial Hemp and Farmers Association, was formed in 2016. Earlier this year, the name was changed to cater for inclusivity, and in keeping with the outcomes of several nationwide consultations.

The association’s President, Aaron Prince, told the Guyana Chronicle on Saturday that the organisation has conducted vigorous research, and would like to make contributions towards the establishment of a hemp industry in Guyana.

Prince, who was present at Attorney-General (AG) Anil Nandlall’s weekly outreach at Annandale, East Coast Demerara, explained that he had travelled to China, where he spent five months conducting research on industrial hemp.

Richard Shew, the association’s Secretary, has spent time in Canada on a similar mission, while Keyon Rhobe, an executive member, has perused the creases and crevices of Guyana doing groundwork with local farmers.

“What we have done is that we would have researched a lot of laws, rules and regulations [of the industry] and [tried] to formulate a plan which includes the laws, the processes involved, the formulation, the guiding, the monitoring, the evaluation, testing, distribution, sale, by products, everything,” Prince said.

He also explained that the association has been involved in discussions with international companies such as the Australian firm, Textile & Composite Pty Ltd, which wants to invest in the domestic market here.

The investors have expressed their desire to import machinery such as decorticators, an important piece of equipment into Guyana to separate the tough, woody interior of the hemp plant from the soft, fibrous exterior.

They plan to work alongside the local farmers, and pay market price for the locally grown hemp, Prince explained.

He added that such an occurrence will create a magnitude of jobs, not just in the farming sector, but for Guyanese from all walks of life.

There is a common misconception amongst Guyanese that hemp is marijuana (‘ganja’). However, while they are from the same family, they are different.

Cannabis is a taxonomic term referring to a genus of flowering plants that are members of the Cannabaceae family. Hemp is a specific type of cannabis scientifically classified as Cannabis Sativa. Marijuana is the intoxicating cousin of hemp.

“The difference in hemp and marijuana is that hemp is used to describe cannabis that contains 0.3% or less tetrahydrocannabinol (THC) content by dry weight, comparatively. THC levels in marijuana flowers are generally between three and 15 per cent or more, depending on the strain,” Prince explained.

He added: “THC is the chemical compound that gives you euphoria when you smoke marijuana; the 0.3% THC in hemp cannot get you high.”

In the United States of America (USA), this distinction was used in the legal definition of hemp, as specified in the Agricultural Act of 2018 and other laws.

Prince informed this publication that the Association has “been disseminating information through various means to educate people on the distinction of hemp and marijuana”.

Guyana’s Narcotic Drugs and Psychotropic Substances (Control) Act 1988 provides for the criminalisation and possession of, and trafficking in narcotic drugs and psychotropic substances and cultivation of certain plants, to which Cannabis is included by virtue of Section 3 of the First Schedule.

This legislation prevents the cultivation of hemp in Guyana.

The Minister of Legal Affairs and Attorney-General, Mr. Anil Nandlall, on November 18, 2020 had informed this publication that as part of the People’s Progressive Party/Civic (PPP/C)’s Manifesto promise, the government is currently conducting research on the topic, and Cabinet will be briefed on the way forward, once the said research has been completed.

“A convenient point to start is to recognise that we, in our Manifesto, and during our campaign, promised that we will explore the possibility of hemp cultivation in Guyana,” Minister Nandlall explained.

He added: “I have been tasked with the ministerial responsibility of doing that, specifically, to inquire and advise Cabinet on whether hemp is a prohibited substance under our current narcotic legislation. That research has begun; it’s a work in progress, and Cabinet will be updated shortly.”

The Association wishes to express its gratitude to the government and the AG for conducting forums such as the ‘Taking Government to the People’ initiative, where they were given an opportunity to express themselves.

“We have written the previous administration countless times; we [had] written the former president, the last Legal Affairs Minister, the Minister of Agriculture, everyone [and] we got negative responses,” Prince informed.

The Association’s representatives were pleased to meet the AG, who informed them of the status of deliberations and research currently being undertaken. The AG, during Saturday’s interaction, assured the organization that they will be included in the consultation process.