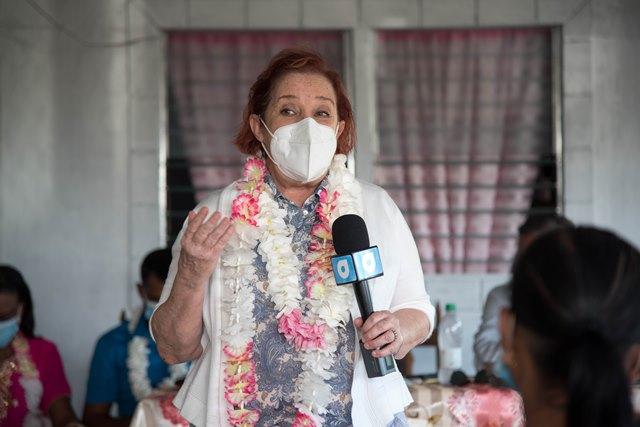 Minister of Parliamentary Affairs and Governance, Gail Teixeira, said, while the Government’s initiative is bringing relief to the most vulnerable, it is also strengthening the economy.
“Every time a person gets money, they will spend it. Instead of giving the business community the money, we give the people the money. The people decide how to spend it and that money circulates in the economy, it allows the spending power of the people to be improved, business people to open up and buy more and rehire workers sent off because of COVID,” she told residents of Mahaica Creek, Mahaica-Berbice (Region Five) on Friday.

The Government started distribution of the $25,000 per household cash grant initiative back in September, to assist persons adversely affected by the pandemic.
Minister Teixeira said between March and August of this year, more than 5,000 persons lost their jobs as a result a shrinking economy.
While many countries around the world have provided support to their citizens, Guyana is among the few, especially within the Caribbean region, to offer financial assistance.

“We have finished 99% in Region Seven, all the mountainous and riverine areas. We have finished Region Nine and Region One and Eight…so we are moving on to the coast now, with Region Three and Region Five,” the Minister said.
Minister Teixeira explained that the Government started the exercise in the interior regions, since its vastness add to the challenges there. There are instances, she said, where the closest shop is miles away.
The grant however, is making a significant impact in people’s lives, according to a government statement.
In Georgetown, a family may use it to pay electricity bill, while in a farming community like those in Region Five, persons may choose to buy things like seeds and pesticide.
“And so, the money is to be used by you for what it can help you out with, and we have to look at how we can turn around the economy,” she said.

Meanwhile, earlier in the month, Vice President, Dr. Bharrat Jagdeo, said the cash grant distribution was moving smoothly, with most of the far-flung regions already receiving their monies.
“The feedback has been good; it has been helping people. It’s a small sum of money, but it has been helpful to a lot of people. And this is a large-scale task to go to every home in the country, especially in this time,” he had told a press conference.
He said also persons living in multiple family homes have been co-operating, and that the ‘pink’ query form arrangement has been working well.