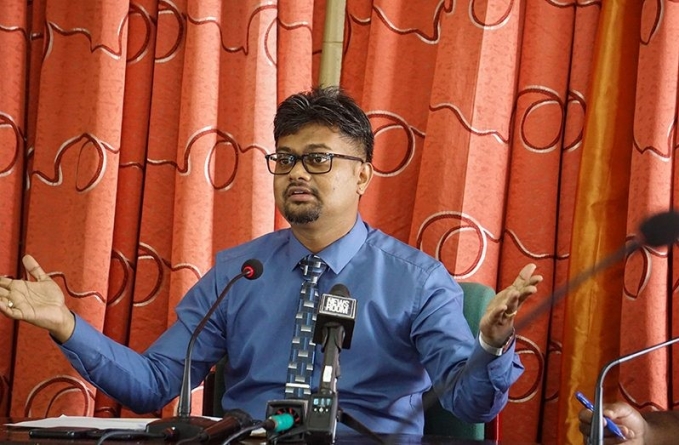 THE Mayor and City Council (M&CC) Human Resource Management (HRM) Committee, on Tuesday, met and decided that the role of acting Town Clerk will be filled by Assistant Town Clerk, Julian Orgista, who will replace Candace Nelson. The committee also decided that Nelson, who was appointed to the post while acting Town Clerk, Sherry Jerrick, proceeded on vacation leave, will return to her substantive position as training officer. At a press conference on Wednesday at the M&CC, Mayor Ubraj Narine disclosed that the decision was made after a disagreement between the Council and Nelson, consequent to her failing to understand her duties.

Narine explained that the issue originated from a letter that was sent by Nelson to the Local Government Commission on December 8, which was not approved by the M&CC. The Local Government Commission Secretariat responded to Nelson’s letter instructing that City Treasurer, John Douglas, proceed on leave; contrary to the Councils desire to have his leave deferred. “Committees make recommendations and then it comes to Council and when she called me as Mayor on Friday about this said letter, I said to her ‘take this letter to Council, because Council has to give a direction to the Town Clerk how to address such a letter’,” Narine explained.

He added: “She failed to do so, she had done the opposite, and she had instructed the HRM to carry out the duty of the Local Government Commission”. At a statutory meeting on Monday, Nelson purported that her supervisory body is the Local Government Commission, and further, she does not take instructions from the Council. The response by Nelson was not well accepted by the Council and a motion was immediately tabled and moved to remove and replace Nelson, which was legitimatise through the HRM Committee on Tuesday. Narine explained that the duties of statutory officers of the M&CC are outlined in the Municipal and District Councils Act Chapter 28:01, which explicitly states the Town Clerk is a servant of the Council.