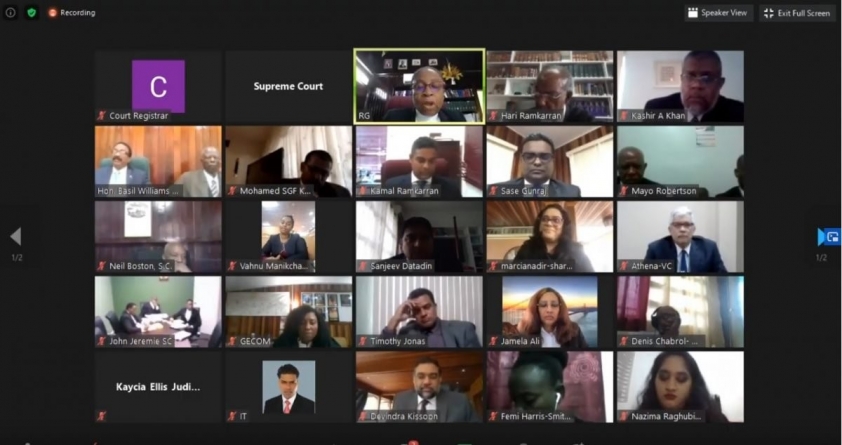 Chief Justice Roxane George today said that oral arguments will begin on Friday afternoon, July 17 at 2 pm on the latest challenge to the declaration of results from the controversial March 2nd general elections and arguments should conclude around 5 pm and a decision could be handed down by Sunday.

This was stated today by Justice George during a historic live streaming of a virtual case management hearing.

The CJ identified the issues that she would have to address in the hearing.

She said that the court would first have to determine whether it has jurisdiction in this matter.

Another matter to be considered would be whether Section 22 of the Election Laws (Amendment) Act of 2015 is constitutional or unconstitutional.

She said that a tangential issue would be whether the March 13 declarations of the returning officers of the 10 districts should be set aside or retained.

The CJ further said that the court would have to address whether the case before her is res judicata – a matter that has been adjudicated by a competent court and therefore may not be pursued further by the same parties.

In this respect she adverted to cases at the Guyana Court of Appeal in relation to Ulita Moore and at the Caribbean Court of Justice.

The new legal action, brought by Tucville resident Misenga Jones, contends that GECOM Chair Claudette Singh can only make a declaration from the report submitted by the Chief Election Officer Keith Lowenfield and that neither she nor the Commission can dictate to him what his report should contain.

As a result, Jones, who is represented by attorney Mayo Roberston, asserts that the Guyana Elections Commission (GECOM) is obligated to accept the CEO’s report of June 11th, in which he relies on the declarations made up to March 13 by the Returning Officers for the 10 administrative regions. Those declarations, which were disputed due to the manipulation of the Region Four results, had been held in abeyance as the recount was agreed to. The recount showed the PPP/C won the majority of votes, while Lowenfield has sought to declare results in favour of the incumbent APNU+AFC.

GECOM, Singh, Lowenfield and the Attorney General have been listed as respondents in Jones’ action.

The Chief Justice said that counsel for the applicant, Jones has up to 11 pm today to submit pleadings which must be no more than 10 pages long.  The named respondents will have up to 10 pm tomorrow and a number of other political parties who applied today to be joined to the proceedings and were approved have up to 11 am on Friday. The oral hearing would begin at  2 pm on Friday and  conclude at around 5 pm. The CJ said she would be able to say more then about when a decision is likely to be handed down but floated the possibility of Sunday. She said that the issues before the court are “very, very clear”.

Counsel for the PPP/C, Douglas Mendes asked for more than the 15 minutes allotted to the party at Friday’s hearing.  He asserted that the party has a “keener interest in the outcome of the proceedings” since the intent of the application was to displace his party’s candidate. The CJ said on perusal of his submission she could make a decision on his request.

During the virtual hearing the CJ shut down cross talk when Maxwell Edwards, counsel for the Attorney General sought to interrupt lawyer Timothy Jonas. The CJ firmly intervened stating “Mr Edwards you are not in charge of this hearing. Do not get into cross talk”.