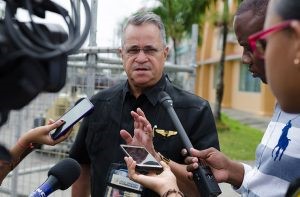 What seemed like something out of a poorly-directed movie occurred on Thursday morning when the Guyana Elections Commission (GECOM) was set to reconvene the verification of Region Four’s statements of poll at its tabulation centre but a series of other unexpected events took centre-stage.

The Guyana Chronicle arrived promptly at the tabulation centre on High and Hadfield Streets prior to the scheduled 09:00hrs start of proceedings. It witnessed several high-ranking party officials entering the building, along with members of the diplomatic corps and the Electoral Observer Missions (EOMs).

However, about one hour later, these same officials began to exit the building, one-by- one, annoyed that the process had not yet recommenced. Chair of the Private Sector Commission (PSC), Captain Gerry Gouveia first told the media that he was unaware as to why the process was being stalled, stating that he was “baffled” by the prevention of the return of the city to normalcy. “It’s absolutely ridiculous. This here is the most simple process you can imagine; this is an exceptionally simple process. This is just a straight case of reading the numbers off every Statement of Poll, and putting the number in an Excel spreadsheet,” he said.

However, stakeholders involved in the process, including party representatives and agents, could not see eye-to-eye on the way forward. Next, Change Guyana Prime Ministerial Candidate Mishka Puran, and Party Executive Nigel Hinds spoke to the media outside the tabulation centre, but their remarks went against the grain of the advice of EOMs on how political parties to treat with messages sent to their supporters.

Hinds encouraged the two main political parties to release their own tabulations on which would have won the elections to somehow settle the matter once and for all. He said this, even as it is widely known that GECOM is the only authorised body, by law, to declare the results of an election. “If the two parties have the numbers, APNU+AFC and the PPP, they should publish the numbers if GECOM can’t do the job, because we could be waiting a month or even longer with what we’re seeing,” he said.

Hinds continued along the line, although the media questioned him further, putting forward that this would not be the advisable option. Making the third appearance was former president, Donald Ramotar who told the media that Guyana needs transparency, and that it was a shame that this was not happening. “We are confident that the election; the voting itself had a lot of integrity. And now it’s the question of giving the people the results of their vote,” he said.

Meanwhile, Opposition-nominated GECOM Commissioner, Sase Gunraj exited to state that he could not give an explanation for the delay. He said: “There are several people there waiting for this process to start that is not commencing.”

Moments later, at around 10:30hrs, the police informed the media that there was a bomb threat made to the building. Two large dogs, presumably bomb-sniffing canines, were ushered into the building’s compound, while another individual entered with a case. The police asked that members of the media, who were standing at the exit of the building the entire time, distance themselves at their own discretion. It was then that members of the diplomatic corps and EOMs were seen gathering at the entrance of the building.

Speaking with the police-in-charge were US Ambassador to Guyana Sarah-Ann Lynch, and Canadian High Commissioner to Guyana Lilian Chatterjee. Other temporary staff of the Commission were seen lined along buildings opposite the GECOM Centre, even as members of the Guyana Fire Service (GFS) and additional ranks of the Guyana Police Force (GPF) arrived on the scene.

Even so, a large amount of officials, Party leaders and their agents remained in the building, refusing to leave the post where the verification was expected to take place. Some distance away, where the police had placed barricades, supporters of the ‘Coalition’ government gathered, voicing their concerns to the media. They said that they had no intention of causing any form of disruption; that all they wanted to do was see and hear for themselves that matters at the Commission’s Centre were going in accordance to the just process. Leading up to midday, leaders of other smaller parties such as the People’s Republic Party (PRP), the United Republican Party (URP), the Leadership and Justice Party (LJP) and The New Movement (TNM) voiced their concerns about the delay in verification and other matters.