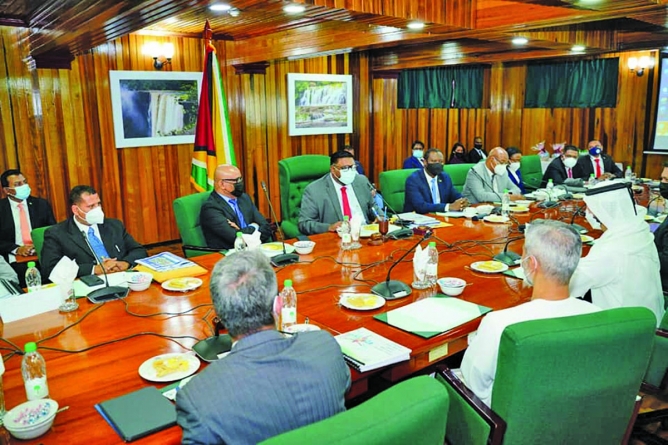 His Highness, Sheikh Ahmad Dalmook Juma Al Maktoum of the United Arab Emirates (UAE) has led a high-level delegation to Guyana on Thursday for a three-day state visit.

The visiting delegation was welcomed at the Cheddi Jagan International Airport at Timehri by Foreign Affairs and International Cooperation Minister Hugh Todd, Tourism and Commerce Minister Oneidge Walrond, and Minister within the Public Works Ministry, Deodat Indar, along with several other officials.
Shortly thereafter, the delegation met with President Dr Irfaan Ali and Vice President Bharrat Jagdeo, with whom they had brief discussions on matters of importance.

The visiting envoy met with members of the cabinet, including Minister Hugh Todd, Natural Resources Minister Vickram Bharrat, Housing and Water Ministers Collin Croal and Susan Rodrigues, Agriculture Minister Zulfikar Mustapha, Public Works Minister Juan Edghill and other Government officials.
The UAE team is expected to stay in Guyana for three days, during which they will engage in high-level talks with Guyanese officials on a number of areas of mutual interest, including oil and gas.

Over the next few days, His Highness Sheikh Ahmad Dalmook Juma Al Maktoum, a member of the ruling family in the UAE, and members of his team will meet with several Government officials from various ministries.
The UAE, one of the top oil-producing countries in the world, is expected to lend assistance to Guyana in oil and gas, among other areas.

Already, the UAE has donated 12.5 metric tonnes of medical supplies and 500,000 rapid testing kits to 14 Caribbean states, including Guyana, to tackle the COVID-19 pandemic. These were distributed through the Caribbean Disaster Emergency Management Agency (CDEMA).
This donation would assist approximately 12,500 medical professionals and other individuals as they work to contain the spread of COVID-19.
To date, the UAE has responded to the COVID-19 crisis by providing over 1,132 metric tonnes of aid to 89 countries, supporting more than 1 million medical professionals in the process.

The UAE has also provided an aircraft to the UN World Food Programme, which runs logistics for the UN response to COVID-19, and 10 million of testing kits to the World Health Organisation.
The UAE is also host to the UN’s largest supply and logistics hub, housed in Dubai’s International Humanitarian City.
Meanwhile, this team is the second high-ranking team to have visited Guyana since the People’s Progressive Party/Civic (PPP/C) took office in August 2020. On September 17, 2020, United States Secretary of State Mike Pompeo visited Guyana during which a Framework Agreement to strengthen cooperation in various sectors, including energy and infrastructure, under the umbrella of the Growth in the Americas Initiative, was signed between the two countries.

In addition, Pompeo committed to reviewing the current ban on catfish imports from Guyana which was imposed back in 2017 under the David Granger-led Coalition Administration.
Secretary Pompeo had stated that the two Governments are working to increase trade and foreign direct investments here, and he was positive there would be a good outcome on the ban.
The US Secretary of State, during his two-day visit, met with the Head of the Caribbean Community (Caricom) Secretariat and officials from American oil giant ExxonMobil.

During the meeting, the US Secretary of State thanked Caricom for its support for democracy in Guyana, which helped ensure a credible outcome of the March 2, 2020 elections.
The US Secretary of State himself played a prominent role in pushing for democracy in Guyana during that tumultuous period. In fact, he had announced visa restrictions back in July against Guyanese officials responsible for undermining democracy here.